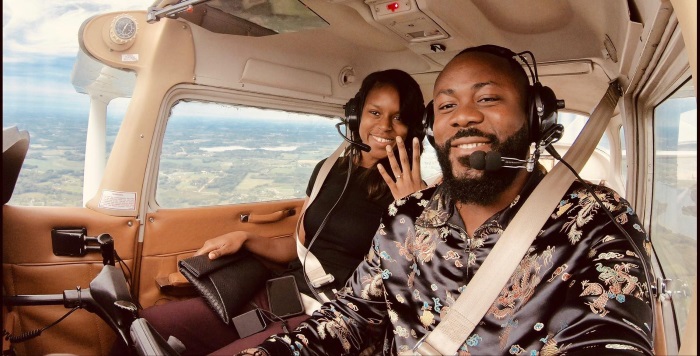 What makes this a unique situation? Many traditional couple would rather buy gifts like cars or take their partner to a fancy spot and kneel down to propose. But in this situation, rather than kneeling down, he took her up in the sky by solely flying his girlfriend and surprisingly proposing to her.

DJ IREM$ aka “Captain IREM$ the DJ” from Ebonyi State Nigeria attended flight school in the United States where he eventually got his pilot license. During his training, he still didn’t give up his passion for music and DJing, he managed few artists that never made it big in the mainstream media but his focus was about enjoying his craft as an artist. He also owns and operate “Twin Cities Auto LLC” a successful licensed Car Dealership business in the state of Minnesota where he has been buying and selling both luxury and basic cars across the United States and Nigeria as well.

How it all started, after watching couple of pilots engagement videos on YouTube, he realized that this style of engagement isn’t common in our black community and he decided to take one for the team and to also prove to us that our black men are romantic too. According to him, this wasn’t intended to provoke the black pilot community but to encourage them to start sharing their memorable moments online so that our future  kids can be proud of us and also do better, because without these moments, we’re just another pilot up in the sky.