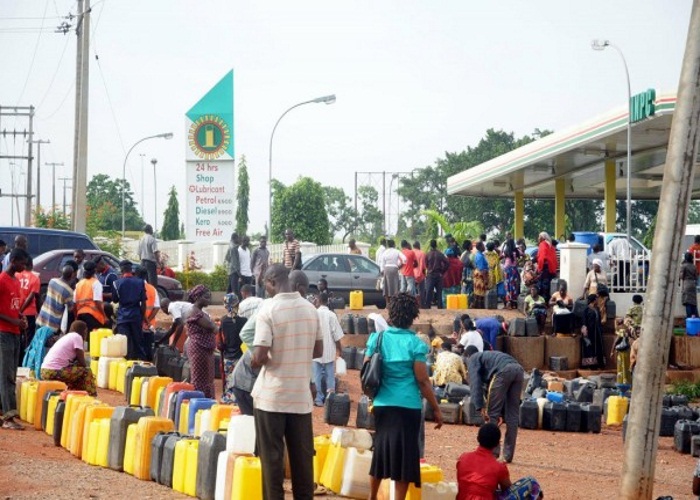 “We are assuring you before the end of the week queues will be a thing of the past and if it still persist, I will personally be on the stations to see that you get fuel”, she said.

Aisha said the queue was as a result of speculations about impending increase in pump price of petrol.

“There is this speculation that price of fuel and other products will be increased and people tend to panic.’’

She, however, said that leakage and pipeline vandalism were part of the challenges facing distribution. According to her, the corporation is doing its best to address the problem.

“I think this is a wrong time for Nigerians to begin to queue up to buy fuel and engage in panic buying.

It is easing out, and by tomorrow and by the end of the week, the long queues will disappear all over the country”, she said.

She added that the corporation had adopted a standard practice by ensuring 24 hours service delivery to ease out the queues.

Managing Director, NNPC Retail, Chris Osarumwense, said the corporation had enough and had distributed products round the country.

“We had a small challenge in our supply systems; but that has been ratified. It will take some time for us to clear the queue” he said.

He, however, said that Petroleum Products and Marketing Company (PPMC), had capacity to ensure distribution of products from March 3 to April 2.

“We are to service the NNPC network, all over the country; we get about 225 trucks daily.

In NNPC branded retail, we have about 550 retails as well as our affiliated retails”, he said.

The Supervising Minister of Information encouraged other petrol stations to ensure 24 hours service delivery so as to ease out the queues.