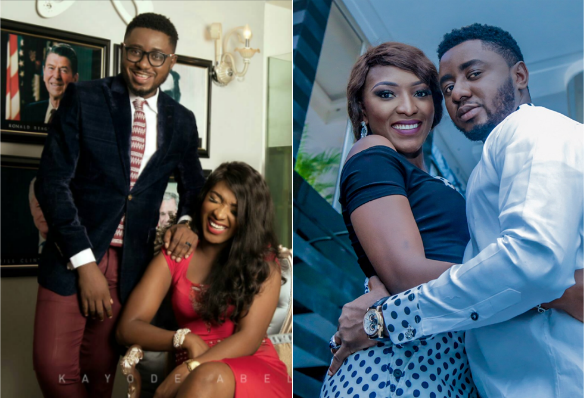 The beautiful couple took to their respective social media accounts to celebrate themselves, while Esther took to thanking God for the journey so far, Phillip shared a story on how a close friend of his told him his marriage wont last for 3 months.

Its only God that makes the difference. Lord its you and you alone. One year to forever. Happy wedding anniversary to us #july30 #weddinganniversary #wearegrateful #goddidit #theojires #givethanks #steadyandateadfast

TRUE LIFE SOTRY:
Someone very close to me and he was someone I respected confronted me and said this words I quote; “philip you messed up big time with these kind of move and decision.Have you not realized that Nigerian actors/actresses marriages don’t last?

Didn’t life teach you enough? You way be smart guy ,you don reach where your smartness suppose play you come dull.I give you three months max and your marriage will crash”He went further and further and then concluded with am not coming for your wedding because I can’t waste my time and flight money for a made in China event.

So,I while I was driving back home I had one million thoughts because I had listened to negative vibes from someone Hmmmmm.

Dear @estherene , words of man are not words of God, their thoughts and will are not his.we decreed/declared love,peace and harmony in our union and we got that overflow,which feels new every morning.The lines they said and thought we won’t cross my love,we crossed borders and took over territories and we are heading to conquer nations.

Happy Anniversary to us one year down,eternity left.