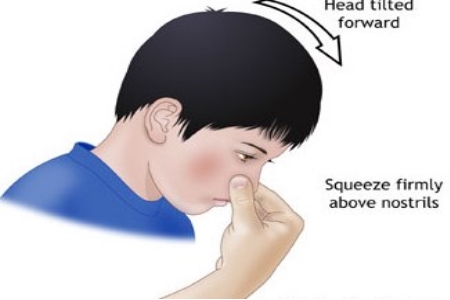 Dry air is the most common cause of nosebleeds. Living in a dry climate and using a central heating system can dry out the nasal membranes, which are tissues inside the nose. This dryness causes crusting inside the nose. Crusting may itch or become irritated, and if scratched or picked, the nose can bleed.

Taking antihistamines and decongestants for allergies, colds, or sinus problems can also dry out the nasal membranes and cause nosebleeds. Frequent nose blowing is another cause of nosebleeds.

Other common causes of nosebleeds include:

Other causes of nosebleeds include high blood pressure, a bleeding disorder, blood clotting disorder, and cancer.

Injuries that might cause a nosebleed include a fall, a car accident, or a punch in the face. Nosebleeds that occur after an injury may indicate a broken nose, skull fracture, or internal bleeding.

How to Treat a Nosebleed

You can self-treat a nosebleed at home. While sitting up, squeeze the soft part of your nose. Make sure that your nostrils are fully closed. Keep your nostrils closed for 10 minutes, lean forward, and breathe through your mouth.

Do not lie down when trying to stop a nosebleed. Lying down can result in swallowing blood and can irritate your stomach. Release your nostrils after 10 minutes and check to see if the bleeding has stopped. Repeat these steps if bleeding continues.

You can also apply a cold compress over the bridge of your nose or use a nasal spray decongestant to close off the small blood vessels.

See a doctor if you’re unable to stop a nosebleed on your own. If a foreign object caused your nosebleed, your doctor can remove the object.

A medical technique called cauterization can also stop persistent or frequent nosebleeds. This involves your doctor burning the blood vessels in your nose with silver nitrate (a compound used to removetissue) or a heating device. Your doctor may also pack your nose with cotton or gauze to apply pressure to your blood vessels and stop bleeding.

How to Prevent Nosebleeds