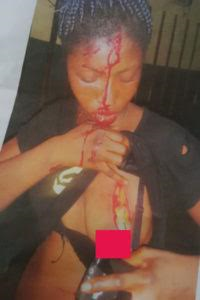 According to reports, a 28-year-old nursing mother, identified as Tina Promise, was arrested and arraigned following a vicious attack on another woman,.

Promise, who has now been arraigned  before an Igbosere Magistrate court on a one-count charge of unlawful assault for inflicting injuries on a woman is now awaiting persecution.

The mother of 3, was said to have attacked another woman, she suspect her lover was cheating on her with. According to reports, Promise, who lives at Molade Okoya Thomas Street, Victoria Island, Lagos, allegedly attacked 22-year-old Esther Onogwu, on the 6th of February at about 9:20 p.m. as the former was returning home from her job as a cleaner at a hotel where she works.

Promise, proceeded to accosting Esther, demanding that she gave her the key to her house. Esther, who was unaware of whom Promise is, declined asking why she should do such.  Immediately, Tina reportedly brought out a razor and attacked her with it, slashing her on the head and breast.

The prosecutor, Sergeant Francesca Job, relayed the incident to the court yesterday. He revealed how after Promise inflicted the injuries on Esther made to flee but was stopped and ordered to take her victim to the hospital.

Promise refused, saying she was not buoyant enough to foot anyone’s hospital. The witness, Esther, proceeded to taking the suspect t the station, reporting her a the bar beach police station. On getting there, she was immediately taken to the hospital to receive treatment.

The presiding Magistrate A.F.O Botoku, after listening to the case before him, granted the defendant bail in the sum of N200,000, with one surety in like sum. The case was adjourned to March 1, 2017, for further hearing.