OBA AKIOLU: I Told Them That Jimi Agbaje Will Never Be The Governor 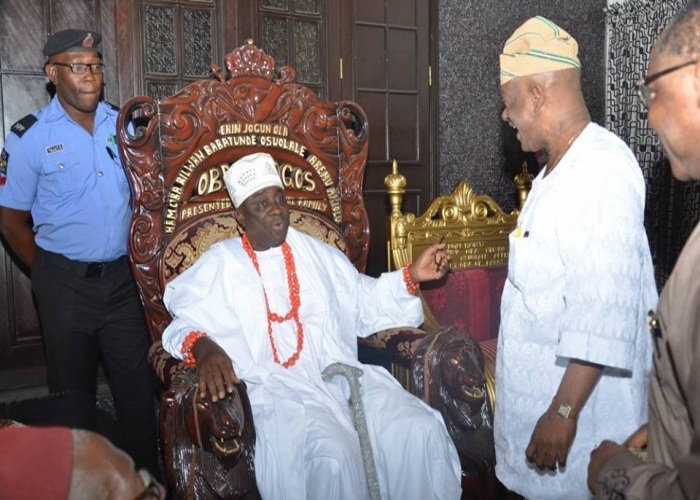 Barely 23 days to the inauguration of Lagos State governor-elect, Mr. Akinwunmi Ambode, Oba of Lagos, Rilwanu Akiolu I, yesterday, narrated how some of his relatives wanted the Peoples Democratic Party, PDP, governorship candidate, Jimi Agbaje and not Ambode to succeed Fashola. According to the monarch; “On May 14, 2014 when I first told all residents of Lagos that the next governor of the state will be Ambode, many didn’t believe me. “I knew all the waters that have passed under the bridge, including my own blood relations, who without consulting me went with others to say that Bola Tinubu, Fashola and Oba Akiolu have pocketed Lagos, saying that this time, they will not allow that. And I told them that Jimi (Agbaje) will never be the governor. I still maintain it. There is no going back,” he added. The Oba continued, “I have no doubt in my mind, with the cooperation and prayers of everyone, Ambode will perform very well. I told many people that Bola Tinubu planted the seed, Fashola came and watered the seed and it started germinating in geometrical progressions. We have just started.” In his own speech, governor Babatunde Fashola of Lagos State, yesterday, said the monthly Federal Allocation and the monthly Internally Generated Revenue, IGR, will not be enough to fund the Lagos 2015 budget of N489 billion. The governor and the monarch spoke at the public policy lecture organised by the Institute of Directors, IoD and launch of the book edited by Mr. Sam Omatseye titled, ‘The Example: The Era of Babatunde Raji Fashola as Governor of Lagos State,’ in Lagos. Fashola in his lecture titled, ‘My stewardship-Eight years of delivering excellence,’ said the number of migrants into the state daily has constantly increased its population. Earlier, while explaining the reason for writing the book, Omatseye stated that the next generation would need answers to certain issues in the state and would want to know those who started the developmental work in the state. He said “I felt that it was important that those people who saw it, who experienced it, worked and who were insiders were able to tell their stories and that was the reason why I started this project. I knew that about two or more years into his reign, people especially, his colleagues other governors started to see him as a kind of example. I started calling him the governor of example.”