OMG! 22-year-old mother kills her baby by strapping him in car seat for 2 days without food or water 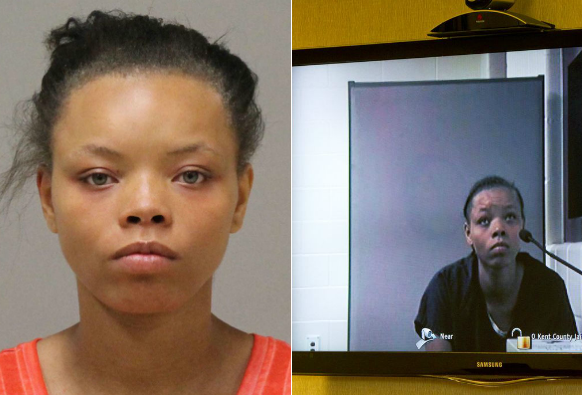 A young Michigan mother has been charged with first-degree murder for allegedly leaving her 6-month-old son strapped in a car seat in a hot apartment without food for two days, according to multiple reports.

22years old, Lovily Johnson, of Wyoming, Michigan, On Monday, charged with first-degree murder and first-degree child abuse in the death of her son, Noah Johnson, according to court records obtained by the Detroit Free Press.

Johnson allegedly told police she intentionally left the child in his car seat in the apartment where they were staying without food or air conditioning, according to court records obtained by local TV station WZZM 13.

Johnson appeared for her arraignment in Wyoming District Court via video. A not guilty plea was entered on her behalf, according to the Free Press.

If convicted of the felony charges, Johnson faces mandatory life in prison.

Johnson’s other child, a two-year-old daughter, has been placed under the supervision of the state Department of Health and Human Services, according to WZZM.

According to an arrest affidavit, police were notified after Johnson brought her infant son’s dead body to Helen DeVos Children’s Hospital on July 19, MLive reports.

“Upon arrival, Noah was clearly dead and had been for some time,’’ Wyoming Detective Robert Meredith wrote in a probable cause affidavit obtained by WZZM.

Johnson allegedly told police that Noah had solely been under her care for the last four days, according to the affidavit.

Although she admitted being home “multiple times a day during that time frame, she knowingly and intentionally deprived him of the necessities of life by not feeding him since Monday evening,” Meredith alleged in the affidavit.

During this time, the baby remained buckled in a car seat on the upper floor of Johnson’s apartment with no air conditioning, the affidavit alleges.

During her arraignment, Johnson told the judge she did not understand the charges, WZZM reports.

“Well, let me make it really clear,’’ the judge told her, according to WZZM. “They alleged you killed a young child and that you physically abused it. Does that make sense to you?”

“OK, at least you understand the charges against you,’’ Timmers replied before denying her bond, according to WZZM.

Besides facing murder and child abuse charges, Johnson has allegedly violated parole for a 2016 embezzlement conviction and will appear in court for an upcoming probation violation hearing, WZZM reports.

Johnson was charged with embezzlement of less than $200 for an incident in 2016, WZZM reports.

If convicted of the felony charges, Johnson faces mandatory life in prison.