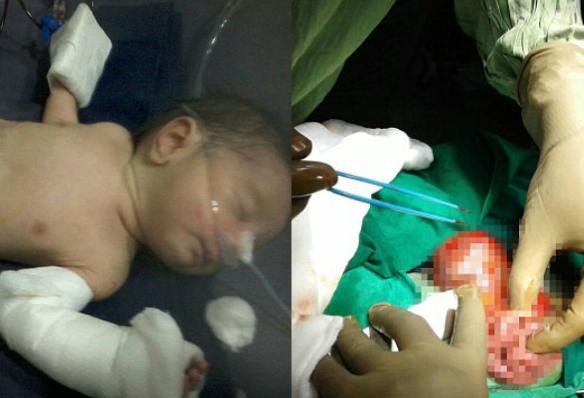 Wonders will never seize to happen in this life! A baby boy was born ‘pregnant’ with his own twin brother.

Doctors discovered the half-formed male baby – complete with a brain, arm and legs – behind the otherwise-healthy baby boy’s stomach after he was born.

They successfully operated to remove the 7cm mass, which they suspect was a rare ‘foetus in fetu’ twin pregnancy – one of around 200 ever recorded in the world.

Radiologist Dr Bhavna Thorat, who spotted the problem during a routine scan, said: ‘It was inside a fetal sac of the newborn.’

The unnamed baby and his 19-year-old mother from Mumbra, in India, are both healthy and doing well.

‘I could see a tiny head with the brain inside’

Dr Thorat noticed the abnormality during a routine scan of the pregnant woman at Bilal Hospital in Mumbra in early July.

When the baby was born nine days later on July 20 he scanned the baby and found ‘another small baby’ inside the newborn’s abdomen.

Dr Thorat said: ‘I could see bones of the upper and lower limbs of the fetus.

‘The unique thing about it was I could see a tiny head with the brain inside.

‘However, this parasitic twin didn’t have a skull bone.’

The newborn was taken to Titan Hospital in Thane for surgery to remove the 150g mass.

Dr. Nichlani added: ‘The baby is now doing extremely well and the mother will begin feeding him soon.’

‘It can lead to death’

Gynecologist Dr Neena Nichlani said: ‘It is a case of monozygotic twin pregnancy sharing single placenta, where one fetus wraps itself around and envelops the other and robs the host of its nutrition.

‘It can be implanted in skull, abdomen or tail bone of the host.

‘Sometimes it can also lead to the death of the host because both get nutrition from a single cord.’

Dr Nichlani said the baby has been sent for further testing, reports are awaited.

Comments to OMG! Doctors shocked to find newborn baby boy ‘PREGNANT’ with his own twin brother