OMG! Father dumps his 4 children in Lagos, leaves a note saying he can no longer carter for them (Photos) 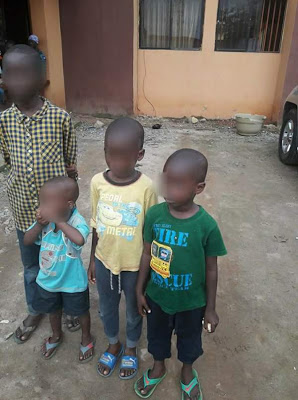 A man reportedly abandoned his four children at Agege Local Government “Area A-Maternity Office” with a short note in their hand, asking the Local Government Authority to carter for them because he can no longer fend for the poor children due to economic hardship, Agege TV reports.

On the short note,the father also said his wife who is the mother of the children left him and abandoned the children.

It took timely intervention of the Agege local government Executive Chairman Hon. Ganiyu Kola Egunjobi and other council workers to rescue the innocent children. They have been taken to a nearby police station for custody and proper care.

The Chairman has asked that proper care be given to the kids pending the time the police will complete their investigation and engage the parents.