OMG! Kenyan woman arrested after she hired hitmen to kill her husband(Photos/Video) 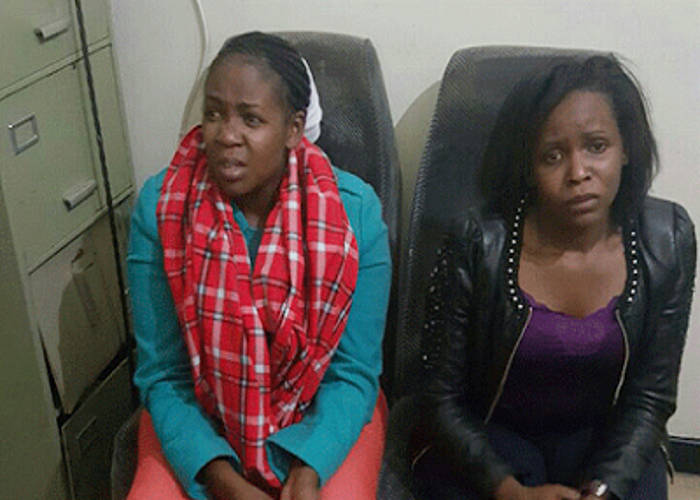 Estranged wife of a Kenyan Airports Authority (KAA) employee and her relatives have been arrested over a plot to assassinate him.
Buburu Directorate of Criminal Investigations (DCI) boss Jeremiah Ikiao on Thursday, June 23, said Bilha Njoki had hired hitmen to kill her husband but police got wind of the plot and laid a trap to catch her.
Detectives, a day earlier had tricked her that he had been killed and his body dumped in Dandora. After she received the ‘good news’, she sent her brother and a friend to the ‘crime scene’ to confirm if it was indeed true.

Unbeknownst to them, undercover detectives who acted as the hitmen, had taken her husband to the supposed scene and covered his body with blood. When the two arrived and saw the ‘body’, they celebrated and called the woman to ‘confirm’ that he was, indeed, dead.

It was then that the officers arrested the two and confiscated their phones before ordering them to reveal the woman’s whereabouts. Police had made sure that they had gathered adequate evidence before making the arrest.

The police informer had been told to meet the planners at a restaurant along Manyanja Road that had a CCTV camera and had also been given a recorder.

The sleuths had also kept a record of all calls and had established that she had bought a new phone and line for the planning of the execution of her estranged husband.

The woman was arrested near Mama Lucy Hospital while inside a black Toyota Harrier together with her sister. The detectives recovered Sh400, 000 and six mobile phones.
The hitman was to be paid Sh500,000, but the woman only paid Sh100,000 as down payment. The remaining Sh400,000, which was recovered from the car when they were arrested, was to be paid after she had confirmed that her husband had been killed.

In his statement to the police, the husband, a resident of Buruburu Phase 5, said that he married her in 2007 and that they have two children. However, they separated early last year and the children have been under his custody.

Mr Ikiao said that his officers had worked closely with her estranged husband to gather enough evidence about the plan and also to trap the hitmen while at the same time ensuring that he was safe.
Police said the intended killing could be due to properties and businesses the two still co-own. Among the properties owned by the estranged couple are a house in Buruburu Estate and a mobile phone shop along Luthuli Avenue.

See the video of the woman and her family:

Comments to OMG! Kenyan woman arrested after she hired hitmen to kill her husband(Photos/Video)