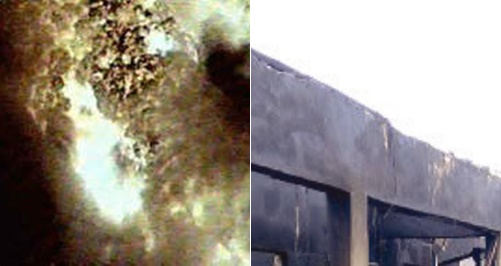 Tragedy strucked the home of a couple Mr. and Mrs. Ademola Danaogun’s, who resides in Rivers State, Nigeria, after they lost four of their kids in one day.

Their home was said to have been rocked with multiple explosion due to storage of adulterated kerosene in their one-roomed apartment which lead directly to the death of their four kids. The wife was blamed for the sad incident.

Mrs. Chinyere, told Southern City News that Mrs. Danaogun had on July 28, 2017, came home with kerosene suspected to be adulterated,

“That night, at about 9.30pm, after she returned home, all her children were inside. While cooking, she and a neighbour began to quarrel. But her husband, who was sitting outside appealed to her to stop quarrelling. I think it must be the fire from the stove that must have spread to the where the kerosene was stored.
“The kerosene was stored in many nylon bags and kept at veranda. Maybe, while she was quarrelling, she never knew that the stove was close to her. She was must have unconsciously kicked the cooking stove and the fire got close to the stored kerosene.
“Her husband, out of fear, immediately told the children to remain indoors until they quench the fire, not knowing that the kerosene had already spilled into the room. The children were burnt to death before any help could come,” she said,

Chinyere also said everything was burned down in the building.

“We were all shocked over the incident, especially when the bodies of the children were brought out. The children held each other before they died,” Chinyere added,

It was also disclosed that the mother of the kids almost went mad, running out of the house half Nakked until her husband located her 2days later. They have since relocated to Oyo State

When contacted, the Public Relations Officer of the Nigerian Security and Civil Defense Corps in Rivers State, Mr. Akin Oguntuase, confirmed the incident.