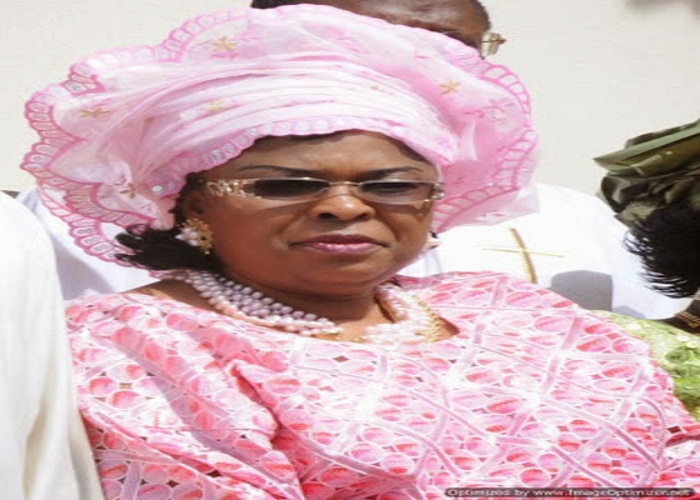 The first lady, Dame Patience Jonathan has not been seen in public since her husband lost his re-election bid in the March 28 presidential election. The Good news is that the Presidency has now broken its silence on her whereabouts.

According to the media assistant to the first lady, Mr. Ayo Adewuyi, in a statement made available to journalists in Abuja, the President’s wife is presently in Congo.

He said Mrs. Jonathan was in the country to join her colleagues from Africa for the celebration of the 30th anniversary of a non-governmental organisation, Congo Assistance Foundation, hosted by the Congolese First Lady, Madam Antoinette Sassou-Nguesso.

Adewuyi however did not indicate when Mrs. Jonathan arrived Congo or when she is expected back in Nigeria. He only said his boss was received on arrival by Nigeria’s Ambassador to Congo Brazzaville, Princess Onipede, in company of top Congolese officials.

Dame Patience was conspicuously absent during the Good Friday and Easter Sunday services held inside the Aso Villa Chapel. She did not also join her husband for the funeral service held in honour of his top aide, Oronto Douglas, in Yenagoa last Saturday.

While she voted alongside her husband in the presidential election in Otuoke, Bayelsa State, she stayed back in her home state, Rivers, during the April 11 governorship election.

She had expressed fears ahead of the elections that she would be thrown into prison if Muhammadu Buhari wins the election.

The Presidency had so far kept mute on her whereabouts, therefore, giving room for speculation.

The Foundation established in 1984 has engendered social action in the areas of health, education, skills acquisition in favour of indigent people of Congo.

Dame Patience Jonathan runs similar organisation in Nigeria, the Aruera Reach-out Foundation which also focuses on the uplift of women and children, the needy and imprisoned.

The First Ladies of Benin Republic, Senegal, Mali, Tchad, Niger, Guinea Conakry are also in Brazzaville for the grand finale of the week-long programmes, during which a National Centre for Sickle Cell Disease was inaugurated.