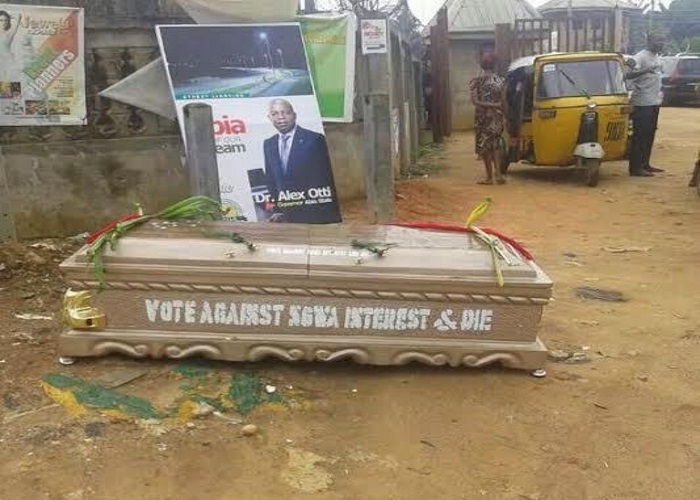 This morning, people in Aba woke up to find caskets placed in some areas with a warning that they shouldn’t go against a particular group’s interest or they will die.

PDP governorship candidate in the state, Dr Okezie Ikpeazu has dissociated himself from the incident.

Read His statement below:-

The attention of Dr Okezie Ikpeazu, the People’s Democratic Party (PDP) governorship candidate for Abia State, has been drawn to the ugly incident witnessed in Aba this morning, where caskets are being dropped at various places in Aba, with a threat that those who will not vote for Dr. Ikpeazu and the PDP in the Saturday’s supplementary election will die.

Dr Okezie is by this means dissociating himself from such dastardly act, and also inform Abians and the general public that such is the handiwork of the opposition who have shown their desperations in various ways since the beginning of the governorship contest.

Dr. Okezie is however assuring Aba people who have always supported him not to be deterred by the intimidation from Alex Otti and his party, APGA, urging Ndi Aba and Abians in the wards and polling units where the supplementary election will hold on Saturday to come out and vote him as they did on April 11.

Dr. Ikpeazu is also urging the Aba business community to go about their lawful business without any fear of molestations.