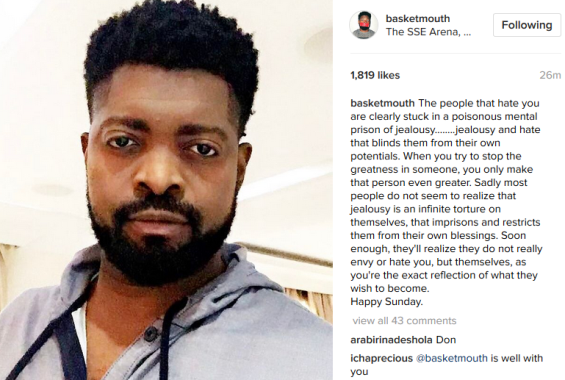 Ace comedian, Bright Okpocha, better known cross the globe by his stage name, Basketmouth, is sometime taken unserious as he is a comic but often times, when he sheds his comic skin, he says words that run deeper than most knives sometimes.

The talented comic, took to social media platform, Instagram, o share some words of wisdom with his millions of fans around the globe.

The people that hate you are clearly stuck in a poisonous mental prison of jealousy…. jealousy and hate that blinds them from their own potentials. When you try to stop the greatness in someone, you only make that person even greater.
Sadly most people do not seem to realize that jealousy is an infinite torture on themselves, that imprisons and restricts them from their own blessings. Soon enough, they’ll realize they do not really envy or hate you, but themselves, as you’re the exact reflection of what they wish to become. Happy Sunday.

Basketmouth, who has achieved a very high level of stardom and popularity since his emergence on the scene several years back, is also set to hold his annual comedy event.

He has also been involved in a couple of controversies and issues with some top celebrities in the country to include controversial media personality Daddy Freeze.

The two have on several occasions exchanged harsh words on social media indirectly and directly involving others in the fight. Their last issue was rumored to have had so much fire in it leading to the sack of Daddy Freeze, who was said to have had to beg for his job back.

He is married to Elsie Uzome Okpocha and the two have been on for 6 years now. They are also proud parents to two children.  He lost his mum Basketmouth, in 2016, sharing the news via his IG page.