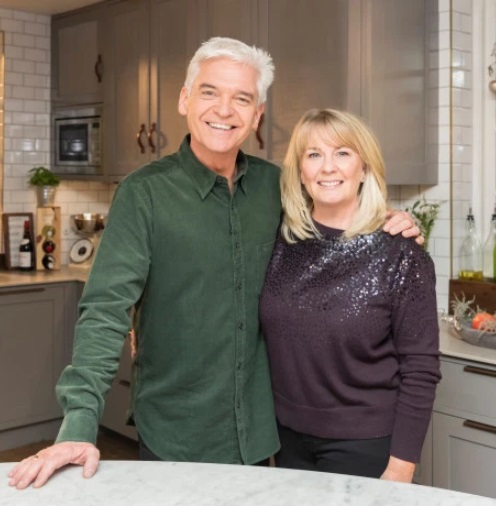 Philip Schofield’s wife of 27 years, Stephanie Lowe has broken her silence after her husband revealed on TV that he’s gay.

On Friday morning, February 7, Briitish television host Philip Schofield took to Instagram to reveal that he’s gay before appearing on This Morning to discuss his announcement.

Two days after his announcement, his wife Stephanie spoke publicly about it for the first time.

Speaking candidly to The Sun on Sunday, Steph, 55, said: “We’ve had to face the most emotionally painful time in our 27 years of marriage.”

Phil married Stephanie, 55, in 1993 after they met when she was a BBC production Assistant and he was working for the BBC Children’s television. Their 27-year marriage is blessed with two daughters, Molly, 27, a talent manager, and Ruby, 24.

Philip said he “knew” he was gay when he married his wife. He added that he believes he’s known he was gay throughout his marriage to Stephanie, saying: “Whatever was ”there’ I thought, ‘OK, whatever this is, you stay back because I am happy.’ “

He added that he was “naive” to think he could suppress his sexuality when he married Steph 27 years ago.

The star has hailed his wife and daughters for the way they’ve supported him through everything.

It comes as it was revealed that Stephanie reportedly has no plans to divorce him. A source has claimed Stephanie Lowe does not wish to formally end their marriage until he is settled in a new relationship.

The source told The Mirror: “Steph isn’t bitter over Phil’s coming out. She isn’t the type to be spiteful by dragging him into court. She’s saying she’ll stick with him until he’s settled and happy in a new relationship, and then they’ll talk about an amicable split deal.”

Two years ago, This Morning celebrated Phillip and Steph’s 25th silver wedding anniversary during the show. However, there are claims Philip’s sexuality was an “open secret” on the This Morning set and he allegedly told ITV bosses about his plans to come out in an impromptu meeting on Thursday. It’s also claimed that his close friend and co-host Holly had known about his sexuality for some time.