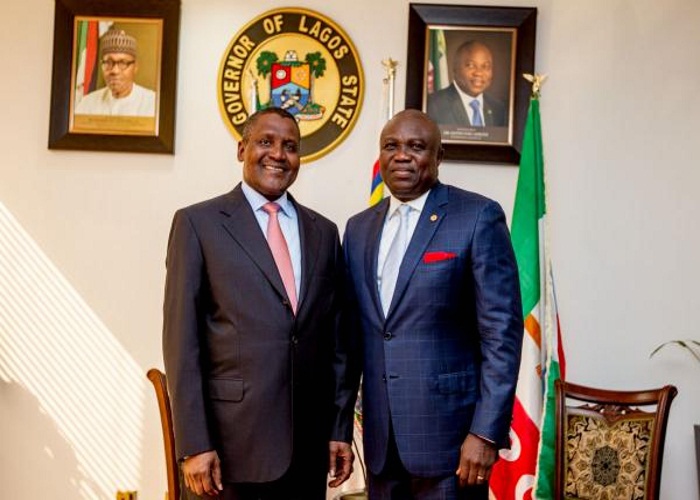 He disclosed this during a courtesy visit to the office of the Lagos State governor, Mr. Akinwunmi Ambode.

He said; “We also assured him that we are going to do a Gas Pipeline from Bonny (River State) to pass under the sea (to Lagos.) When it is completed, Lagos state will never ever experience blackout. There will be electricity 24 hours a day.”

Addressing newsmen after the meeting with Ambode, Dangote said they also discussed the ongoing construction of the largest fertilizer plant of two to three million tonnes of Uranium and Amonia in the Lekki Free Trade Zone, Ibeju-Lekki. He noted that the company is also building ”the largest ever single refinery of 650,000 barrels per day, which is by far more than the consumption of Nigeria and that would satisfy our consumption at least for the next seven to 10 years by the time we finish.”

All these projects Dangote said are no small projects.

‘’We will have challenge in getting people to work there, because at the height of it, there will be close to 38,000 people working at the same location, this is something that we have to partner with the state government. ‘’Having 38,000 people on one site, not every one of them will be from the community, others will be from other states, there would be cultural issues and all that, we need to integrate everybody to ensure that the whole thing works out fine.”

He stressed that the visit afforded him the opportunity to assure the governor of his commitment to complete these ongoing projects already embarked upon by the company.

The business mogul promised to continue to support the state government initiatives geared towards securing lives and properties, adding “I have assured him that we really love doing business here, it’s a friendly state for doing business.”

According to him, “There are quite a lot of things that will come along with creating so many jobs. I think Lagos will be one of the fastest growing cities in Nigeria and Africa as a whole.

‘’ I can assure you that we would do our own bit in terms of your efforts in policing Lagos, for security and whatever the need is, feel free to call us, we would partner with you and whatever you want us to do to make Lagos a better place”.

Responding, Ambode vowed to embark on strategies that would open the state for new investors, aimed at reducing the rate of unemployment in the state.

He said “I will just call on other investors that wherever it is that we can assist we are willing and ready to make sure that investors have comfortable life and comfortable business profile in Lagos State.”

The governor promised that his administration would open up the state to attract new investors and growth of existing business in the state, adding that the bottom line “is to create jobs for our youths.”