PHOTO- Father Brutalizes Son Before Dumping Him at Bus Stop 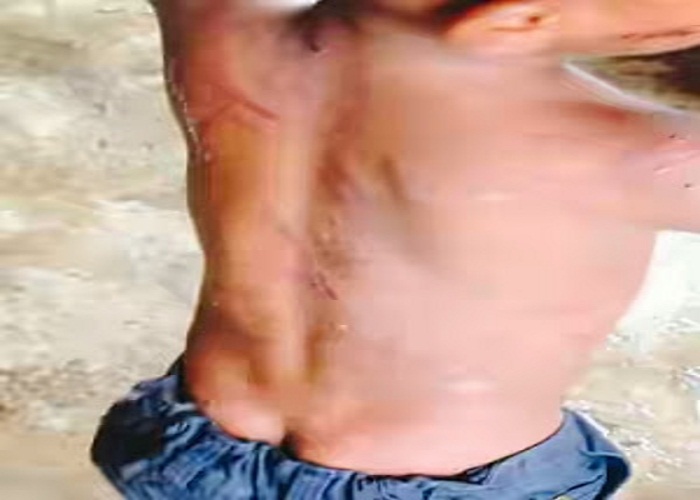 The police in Lagos have arrested a man, Sikiru Mustapha, who allegedly brutalised his four-year-old son, and abandoned him at a bus station in the Iwaya area of Yaba.

PUNCH Metro learnt that the boy, identified only as Lekan, reportedly had scars of the torture on his body. He was, however, picked up by a neighbour.

Our correspondent gathered that Lekan was reportedly handed over to a non-governmental organisation in the area, which took him to the Sabo Police Division.

It was gathered that the police subsequently arrested the father.

A resident of the area, who spoke on condition of anonymity, told PUNCH Metro that Lekan’s mother had been sent away by Sikiru, and he had married a new wife.

She said, “Lekan has a long history of torture from his father. He is poorly taken care of, beaten and left to wander in the area. As young as he is, the father beats him without mercy. On Tuesday, he was beaten up as usual. But this time, he was abandoned at a bus station.

“One of the residents of this area found him and took him to an NGO. He was then taken to the Sabo Police Division, and the police arrested the father.

“Sikiru has a new wife who is a nursing mother. She should have cautioned her husband against maltreating the boy, but she did not.”

Our correspondent learnt that Lekan was now recuperating in a hospital in the Surulere area.

When PUNCH Metro visited the hospital on Wednesday, it was gathered that some officials from the Lagos State Office of the Public Defender and the Domestic Sexual Violence Response Team, to whom Lekan’s torture was also reported, had visited and taken up the case of the boy.

The Lagos State Police Public Relations Officer, DSP Kenneth Nwosu, confirmed the incident. He added that the suspect had been taken to court.

He said, “We arrested the suspect for maltreating his son.

“He has been taken to court in company with some personnel from the Lagos State Ministry of Justice.”