Photo: How Fraudster Duped Girl Of N14,000 while inside the Bank on Wednesday 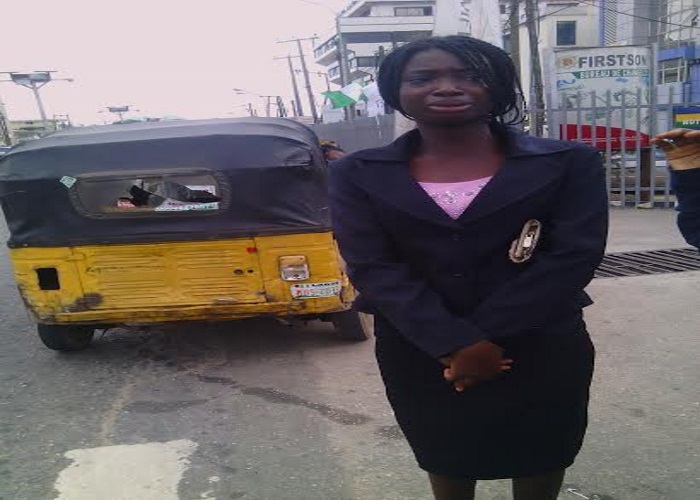 A fraudster on Wednesday reportedly duped a young lady of N14,000 at the Guaranty Trust Bank, GTB, Allen Avenue branch, Ikeja, in Lagos.

The young lady, who identified herself with one name, Ruqayat, was seen crying inside the banking hall and attracted attention from officials and customers. According to Rukayat, a man dressed in a corporate outfit approached her while on a queue, along other depositors.

He claimed to be an official of the bank and demanded if I had a bank verification number, to which I answered no. He collected the money for ease of the transaction and gave me a verification form to fill”, Rukayat explained.

While she moved away to fill the form, Rukayat said, the man went to the counter and was seen talking to a teller.  By the time Rukayat was done, the pretending bank official had gone. Rukayat, who works with a IPhone 6 retail shop at Balogun street, also in Ikeja, burst into tears.

“The money belongs to my boss. I have just been employed two weeks ago and I don’t know where to get a refund for her,” she said sobbingly.

Many bank customers were in disbelief about Rukayat’s story, while a bank security guard reportedly ordered her out of the hall. Rukayat said.

Outside the banking hall, few Bureau de Change operators sympathized with Rukayat. A middle aged Hausa-speaking man, Ibrahim Hamisu told Nigeria Newsbreak a similar incident had happened previously in the bank and the fraudster arrested. The previous fraudster, Hamisu said, acted as though he were a bank official and elected to help two girls who had come to open accounts with the task.

‘He (fraudster) collected two laptops from the two girls and gave them forms to fill. They were able to discover who he was through the CCTV, when the ladies raised an alarm.

The bank was thoroughly searched, but the fraudster had fled by then,” Hamisu said.