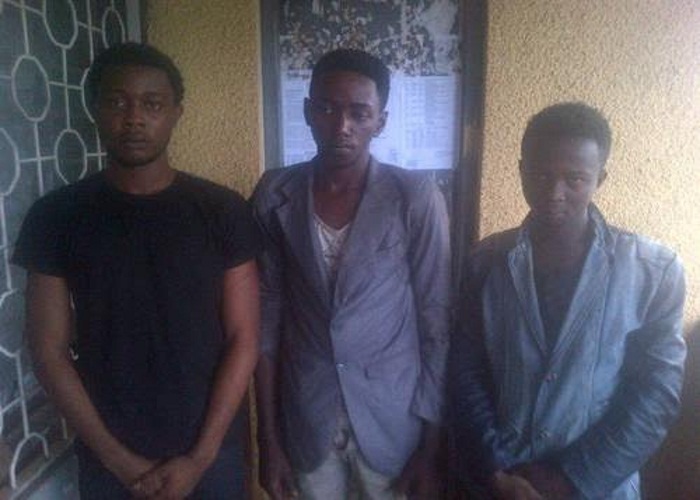 Three students, Fisayo Adetoro a 300 level student of Joseph Ayodele Babalola University, (JABU) in Ikeji Arakeji, Osun state, Emmanuel Omole and Wale Ayeni‎ who are both students of the Federal University of Technology Akure, (FUTA) all pictured, have been arrested by the Ondo state police command for engaging in internet fraud. 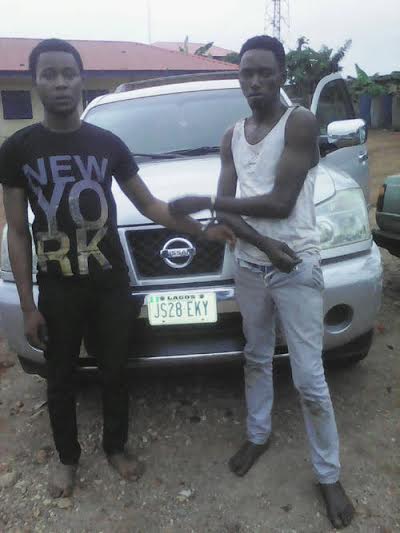 “Ajiboye brought the six i-phones to Akure as requested by the syndicate on 10/5/2015. On arrival at Ondo garage Akure, the three fraudsters took him in their operational vehicle, a Nissan Armanda Jeep with Registration Number JS-28-EKY, and pretended to be heading for Government House, Akure.

On the way, they made a detour to Fiwasaye-Ijapo Road, Akure where they forcefully took the I-phones from Ajiboye, and pushed him out of the vehicle in motion. Ajiboye sustained various degrees of injuries and was rushed by Policemen at Ijapo Division to the Police Clinic, Akure for immediate medical attention.

They again lied that they were lecturers at the Elizade University, Ilara-Mokin. On arrival in Akure on 25/5/2015 at about 16:30hrs, they conveyed Akinola in their operational jeep to a hotel on Ondo Road, Akure.
The three then drugged his food with swinol tablets and made away with the five I-phones.

The syndicate however ran out of luck on 2/6/2015 when they unknowingly contacted the same Akinola Segun on a different website and ordered five I-phones, and deceitfully presented themselves as lecturers from the College of Agriculture, Akure.

Edward Ajogun psc, with his team of detectives employed professional tactics that lead to their arrest of the three students.”

Emmanuel Omole and Wale Ayeni have been expelled from their school. Items recovered from them after their arrest includes a Nissan Armanda Jeep, with Registration Number JS-28-EKY, valued at Two Million, Five Hundred Thousand Naira.