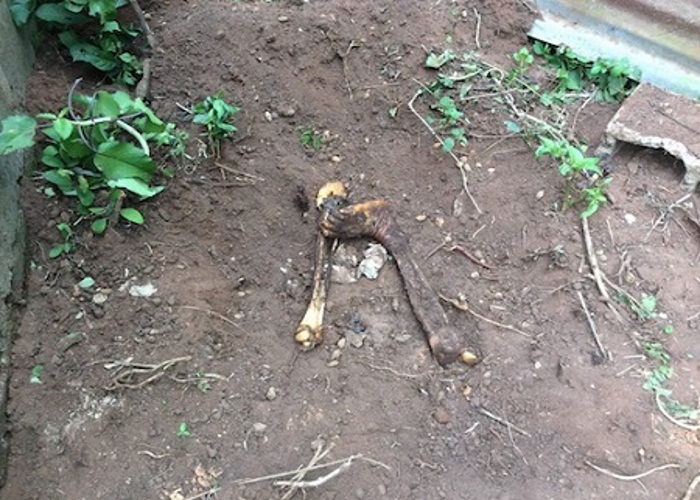 The police, while acting on a tip off on the suspicious activities of the criminals, swooped on them and busted the den.

According to a statement signed by the Police Public Relations Officer, DSP Olumuyiwa Adejobi, the arrest of these suspected ritualists was in connection with the case of a missing student of Gateway Polytechnic, Sapade in Ogun State, Miss Morenikeji Owolabi.

Owolabi, 20, has been missing since June 6 but the matter was said to be reported to the police on 12 June by her parents, who reside in Egbe New Site, Ijebu Ode of Ogun State.

But the lady, deceased, had been killed and pieced by the ritualists, led by one Femi Marcauay, a.k.a Awise, who owns the den but now at large.

“Some parts of her body were buried in a shallow grave at the shrine, while some pieces of “meat” suspected to be her flesh and heart roasted were seen in some containers in the shrine.

As a result of these discoveries, police swung into action and have arrested five suspects, all men. They are; Sotola Wasiu, ,23, Ali Lateef, 22, Adeyemi Ademolu, 29, Omolaso Taye, 21 and Damilare Akinyemi, 22.

Those arrested are currently assisting the police in their investigation.

While addressing the newsmen and residents of the area at the scene, the State Commissioner for Police, Ntomchukwu condemned such criminal and inhuman act, and vowed to rid Ogun of criminals and hoodlums.

He also directed that the Department of Criminal Investigation and Intelligence, Eleweran, Abeokuta, should take over the case for proper investigation and charge those involved in the crime to court as when due.

The police boss however sympathised with the family of the deceased, Morenikeji and her colleagues for their loss, assuring them that justice will be done on the matter.

The Commissioner of Police also assured citizens of the Gateway state that the police will work assiduously to provide adequate security in every part of the state.