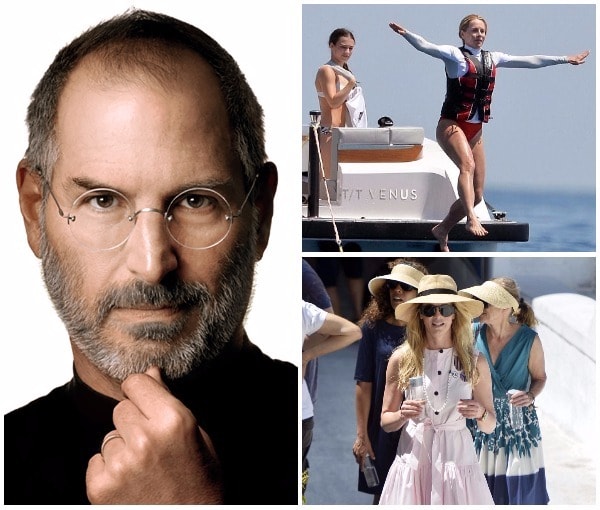 CEO of Apple, Steve Jobs passed away, aged 56, from complications from pancreatic cancer in October 2011.

His widow, Laurene Powell Jobs and their children have been pictured enjoying a luxurious summer holiday on the yacht Steve Jobs ordered and commissioned but never got the chance to use.

Powell had married Jobs two years after meeting him when he gave a talk to Stanford Business School while she was a student there.

Their wedding took place in March 1991 and their eldest child, a son named Reed, was born six months later.

Steve Jobs and wife Laurene later had daughters, Erin and Eve, in the years following.

Now 53-years-old, Laurene and her daughters Erin, 21, and Eve, 19, were photographed waterskiing off the Italian island of Ponza on Monday afternoon before she went shopping with friends. The next day they spent some time with her 25-year-old son Reed off the coast of Portofino, Italy.

Steve and Laurene were married for 20 years before Steve died and Laurene inherited his estate worth about $10 billion. Automatically, she became one of the 50 richest people in the world, reportedly now the sixth richest woman in the world based on Forbes’ ranking.

Despite being one of the richest women in the U.S. she has kept a low profile as she continues with her charitable work.