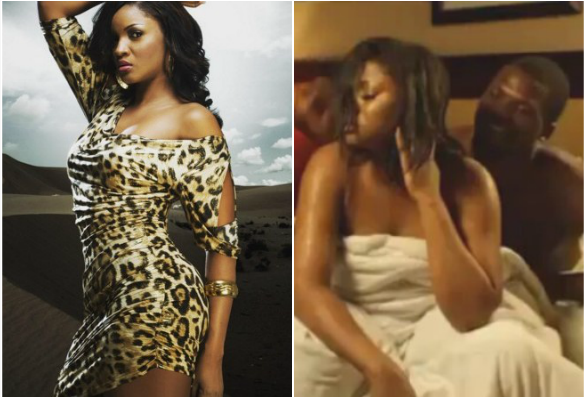 Leading Nollywood actress, Omotola Jalade-Ekeinde, makes her return to nollywood movies. After a three-year break, the 39-year-old is lined up to debut “Alter Ego” alongside Wole Ojo and Jide Kosoko.

The award-winning actress who has appeared in over 300 films  had an exclusive interview with PREMIUM TIMES. She opens up about her career, marriage and playing a controversial character in Alter Ego.

PT: You went off the scene for three years. Was this deliberate?

Omotola: Yes it was. I knew I was going to embark on a break so I starred in a few movies, which have not been released. I shot Blood on the Lagoon with Teco Benson, and another one in London called Amina, which are yet to be released.

I got to that point when I felt like nothing was challenging me anymore and I began to feel like my standard was dropping. I went through that period and I knew I needed to stay away and wait for Nollywood to catch up with some of our ideas.

PT: Do you think starring in Chineze Anyaene’s 2010 movie, Ije, in the United States, sort of placed you on a pedestal?

Omotola: Well, I knew cinema movies were the next step for me. After starring in Ije I knew that the industry was not moving fast enough and I knew the only way out for me was to make that sacrifice and just dropout.

So I starred in movies that I thought could hold forth for me while I concentrate on other things like building my business. Coming back was hard for me because I was aiming for that movie that would challenge.

PT: Your fans can’t stop talking about your sex scenes in Alter Ego. Was your husband comfortable with you playing the role?

Omotola: Some of the sex scenes in Alter Ego were downplayed because I’m married. But I won’t play the sex scenes if it wasn’t necessary to be included in the film. I know by starring in this movie that my fans would either hate me or love me forever.

While shooting the film, I knew I was doing something quite risky. There are several ways to shoot a sex scene tastefully. I’m all for playing a sex scene convincingly and my husband knows this.

I tell my husband, “You know what darling, you married an actor”; and secondly, he is my biggest fan. I tell him, “Do you want me to be great or do you just want me to be good?” He will say, “I want you to be great, sparklingly great”. Then I’ll say, “Ehen, we go love o” and he’s fine with it.

He understands but just like every other human being and the professional that he is, he too wants to be convinced that I played a sex scene because it was necessary. I know when he watches movies sometimes he would say, “Did they have to kiss if they were not going to kiss well?”

PT: You got pretty raunchy with your co-stars in your latest movie, Alter Ego. Are you ready for viewer’s criticisms?

Omotola: When I wasn’t even confident, I starred in a movie called a prostitute, which was released 22 years ago. If I didn’t die then, is it now? I’m ready.

PT: Playing a believable sex scene would mean going extra lengths. Do you think Nigerians will embrace such films?

Omotola: You don’t even have to “chop” somebody’s mouth if you don’t want to. If the scene is not about you showing real mad crazy love then you can’t now be showing mouth to mouth kissing or removing of clothes.

In Nigerian movies, we have downplayed chemistry. I hope we can bring that back. Back in the day when I shot Mortal Inheritance in 1995, I had to spend time with my co-star, Fred Amata.
He was already a renowned director and in those days, directors were revered. So imagine, my director who had directed me in a movie prior now acting as my lover.

I was really afraid but we broke the ice by spending time with each other. So, he demystified himself and we had chemistry and you could tell. So, I’m hoping all of this returns to Nigerian movies. So, as professionals, we need to ask ourselves if it is necessary for a movie to have a sex scene and when it is, it should be done well.

Below is photo from the movie scenes