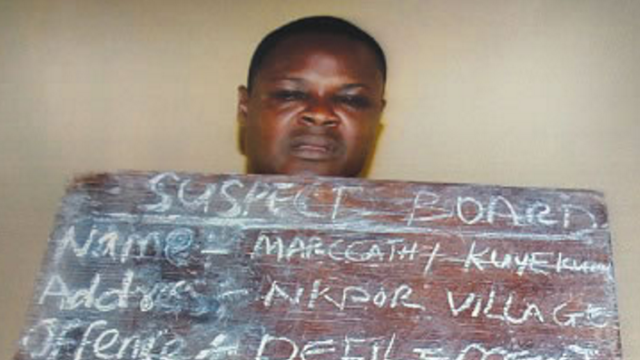 Yet another rape case has been reported as the rising rate of rape around the globe is becoming alarming.

A 5-year old girl, was alleged raped by a 30-year old man in Rivers, who of course after his evil alleged act, threatened and warned the child not to say a word about what happened.

The child, was allegedly raped by a 30-year-old man, identified as McCarthy Kuyemekume, who has since been arrested and arraigned before the Magistrate’s Court in Rumuepirikom in Obio/Akpor Local Government of Rivers State.
The offence was said to have been committed on January 25, 2016 at the accused’s brother’s house located at Saviour’s Estate, Nkpor Village in Rumuolumeni.

According to punch, the alleged rapist, Kuyemekum, reportedly took custody of the girl after he saw her crying. The little girl, was said to have been crying over her mother’s refusal to add milk to her meal.

Unknown to the girl’s mother, the pedophile took her into his brother’s house and had carnal knowledge of her. Kuyemekume, was said to have reportedly sent his brother on a pretentious errand to enable him rape the little girl.

The suspect, after four hours, returned the child to her parents following several stern warnings and threats that she must never reveal what transpired between them to anyone, most especially her parents.
But he ran out of luck as the child’s mother got wind of what happened. She immediately stormed out to report at the Rumuolumeni Police Division., which eventually led to the arrest of the Kuyemekume.

Following his arraignment before Chief Magistrate, E.C. Woke, Kuyemekeme, denied ever having carnal knowledge of the child, insisting that he was innocent of the allegation leveled against him.

The accused pedophile, was ordered to be remanded in prison by the chief magistrate. He adjourned the matter till March 2, 2017.