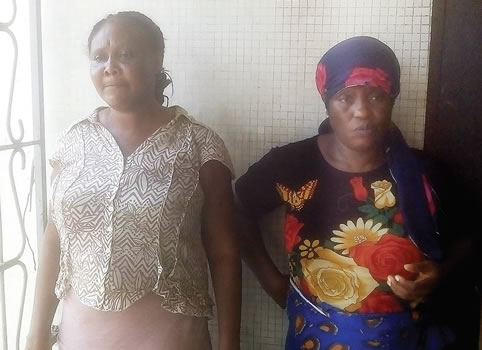 The Lagos State Police Command has arrested two women – one Amadi and Mama Esther – for allegedly abusing a nine-year-old girl, Joy Esemonu, in the FESTAC Town area of the state.

PUNCH Metro gathered that Amadi allegedly poured chemical on Esemonu, which made her sustain injuries in different parts of her body.

Our correspondent was told that Esemonu was subsequently led everyday by the suspect to a pedestrian bridge in the FESTAC area where she was made to beg for alms from passersby.

At the end of every begging trip, the two women reportedly shared the money collected.

However, a Good Samaritan, who observed the victim’s condition on the bridge, reportedly alerted policemen from the FESTAC division, leading to the arrest of the two women.

The matter was subsequently referred to the Office of the Public Defender, which transferred the victim to the National Agency for the Prohibition of Traffic in Persons and other related matters.

A social worker who was privy to the case told our correspondent that Mama Esther was a relation of the victim and had lured her from their village in Port Harcourt, Rivers State.

He said, “The girl lived in Port Harcourt with her parents. But last year, her mother handed her over to Mama Esther after the latter promised to support the family by taking the girl to Lagos. She said the girl would continue her education when they get to Lagos.

“However, when she brought her to Lagos, she decided to hand her over to Amadi, who she owed some money. The woman then decided to use her for begging.

“The girl said she noticed that Amadi would make her sleep before pouring a substance suspected to be chemical on her body. By the time she woke up and scratched the spots after feeling some pains, they would become sore. The woman would then bandaged the place and take her out for begging.

“She said whenever the injuries heal, she would make her sleep again and pour the chemical on her. The woman started with her bottoms and then her laps. She said such  had happened about four different times.”

Another source said Mama Esther, in her confession, claimed that she always collected between N2,500 to N3,000 as her share every day.

The source said the money the women were making off the victim kept them in the fraudulent business.

“The girl said although they lived in a slum in the Oyingbo area, the woman always took her to FESTAC to beg. She said there were other girls in the slum. She could not recall the exact place where her parents lived in Port Harcourt. She mentioned streets like Rumuokoro, Saint Jude and Rumola. She said she attended Saint Jude Academy and was in basic three before she was brought to Lagos. The girl explained that her younger sister, Ebierechi, was with another family. However, the suspect had maintained that they lived under the bridge,” he added.

The Director of OPD, Mrs. Salami Olubukola, condemned the action of the women, saying the state would ensure that justice was served.

She said, “This is a despicable act and the height of man’s inhumanity to man which must be condemned by all. Lagos State will never condone child abuse and cruelty and we shall go to any length to protect our children from barbaric acts.”

The Police Public Relations Officer, SP Dolapo Badmos, said, “Investigation reveals that it is their stock in trade.”

The NAPTIP Lagos zonal coordinator, Mr. Joseph Famakin, confirmed that the victim was in the agency’s shelter.

He said, “The girl was brought to us last Friday and she is going through some psychological counseling and treatment. We are also investigating if there are other people involved in the crime. The two suspects are with the police.”