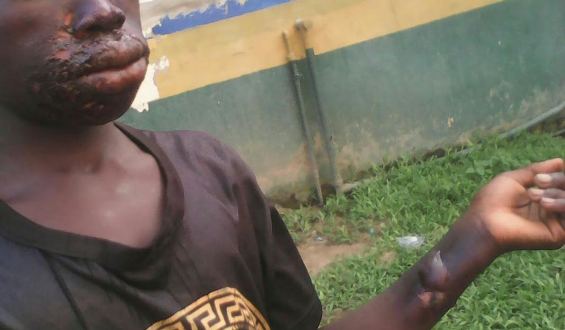 One Ms Uduak was arrested and charged to Calabar Magistrates Court on Monday, November 28th for allegedly pouring boiling water on the face of 10-year-old boy, Daniel Okon Nse in an attempt to wake him up from sleep.
It was gathered that on Thursday, November 24th, at about 5:30AM, the 29-year-old suspect poured boiling water on Nse, causing severe burns and injuries on the child’s face and arm. Mr. Emmanuel Agan who is a neighbour to the accused, noticed the grave injuries on the child on Friday 25th November, 2016 and immediately reported to Basic Rights Counsel Initiative, a front line child rights organization in Calabar.
The organization immediately reported the case to the police and they arrested the perpetrator. The young boy, who is from Uruan in Akwa Ibom State said his dad is late. Until last September, Nse was a pupil of PCN Primary School, Akim, Calabar but stopped going to school after he was asked to repeat primary 3. His mother, a crayfish seller had given him out to live as house boy to one Madam Ime. According to CrossRiverWatch:
“The said Madam Ime is a food vendor (popularly known as “Mama Put”) at No. 7C, Etta Agbor Road, Calabar and on the fateful day of the incident, Daniel could not wake up on time to wash dishes when Ime’s eldest daughter (the accused) woke him up by pouring boiling water on his face.
Basic Rights Counsel Initiative had provided medical care to Nse and written to the Ministry of Sustainable Development and Social Welfare seeking temporary accommodation for the child, and the Ministry has promptly responded by placing the child in a government facility where he is now being kept pending when his biological parents/relatives can be traced

The Magistrate was said to be infuriated with the manner at which Ms. Monday responded to questions as her bail application was been heard, therefore turned down the application, remanded her in Afokang prison until the next adjourned date, Sunday 9th December,  2016.