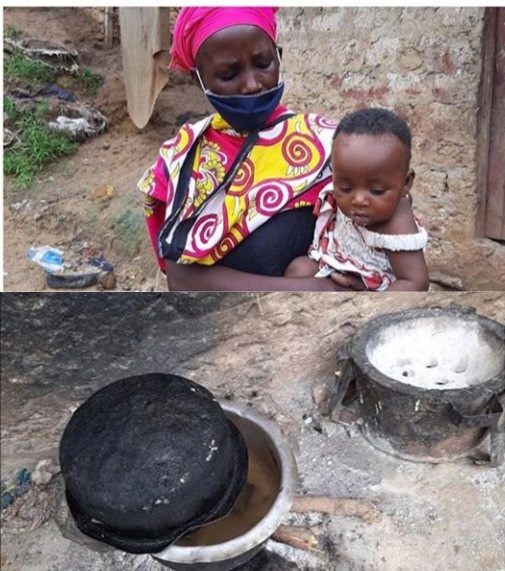 A widow who has 8 children with nothing to feed them, was forced to boil stones to trick her children into having hope that they’ll soon eat.

Peninah Bahti Kitsao, a widow who lives in Mombasa, Kenya, worked as a local laundrywoman before the lockdown.

However, due to the outbreak of Coronavirus, her customer base drastically dwindled and she could no longer raise enough money for feeding.

On Tuesday, April 28, as she watched her children cry due to hunger, she was forced to boil stones to deceive them into thinking that food was on the way. She hoped that they would fall asleep while waiting for the food.

However, the children did not sleep off and a neighbor who heard them crying went over to see what was going on.

According to her neighbour, Prisca Nyakaragio Momanyi, she heard the children’s cries and rushed to check on the matter, only to find that their mother had boiled stones.

Prisca shared her neighbour’s plight with people and the story made it to the local and international media.

The widow was interviewed by Kenya’s NTV and this prompted donations from a number of people.

The widow said she could not believe people would come to her rescue the way they did, calling everything a big miracle.