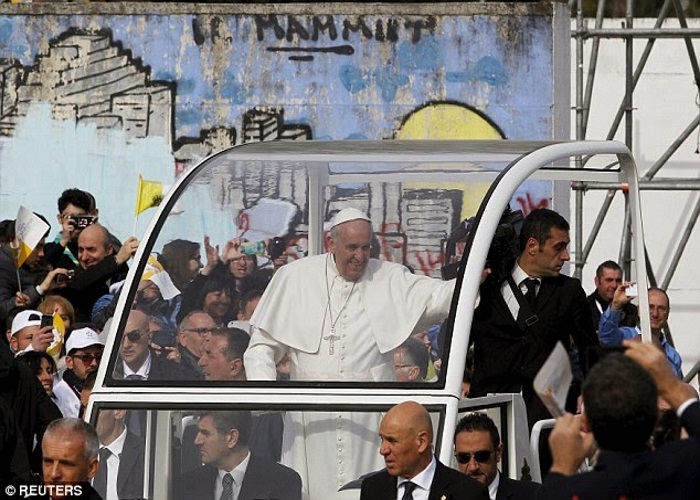 In yet another groundbreaking move, Pope Francis yesterday Saturday enjoyed lunch with inmates  of an Italian prison – and along the line, gay and transgender inmates were invited to join.

While on a visit to Naples, Italy, Pope Francis visited the Giuseppe Salvia Detention Center in Poggiorale, outside of Naples. And even though it was not on his original schedule, insisted on the visit including lunch with inmates.

According to the AssociatedPress, around 90 inmates randomly chosen by lottery, attended the lunch, and that group included 10 inmates from a section of the prison reserved for gay and transgender inmates, and inmates who are HIV-positive. In addition to the prison visit, the pope spoke to residents in Scampia, a neighborhood in Naples, and encouraged citizens to resist the “easy earnings or dishonest income” of the Mafia and the drug trafficking trade.

Since assuming the papacy in 2013, Francis has worked to shift the tone of the Catholic Church’s message toward gays and lesbians to be more progressive. In 2013, the pope famously said “Who am I to judge?” when discussing LGBT members of the Catholic community. Recently, gay Catholics were given seats at Pope Francis’ weekly general audience. And earlier this year, a Spanish transgender man said he had a meeting with the pope – a first for the pontiff.

However, while the pope seems to be taking small steps toward welcoming the church’s LGBT members, Francis  has still reaffirmed his support for “traditional” marriage. In January, on a visit to the Phillipines, he remarked that “powerful forces” threaten to “disfigure God’s plan for creation.” Many people interpreted these remarks to be a reference to same-sex marriage.