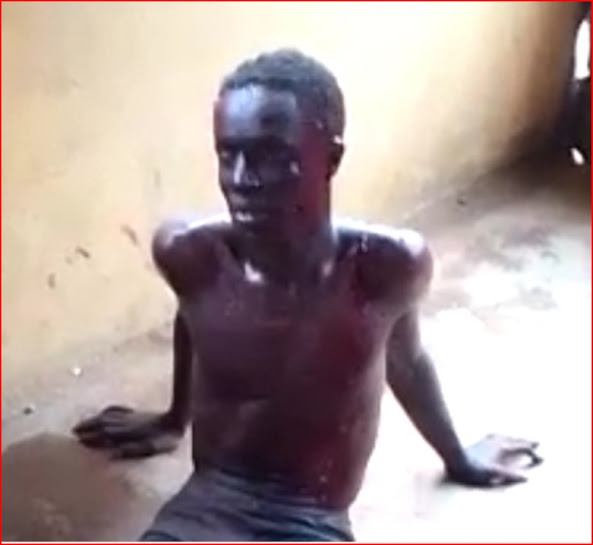 The police officers from Iheagwa Division, Imo State, have arrested an Imo prison escapee identified as Justice Anokam, for allegedly stabbing a pregnant woman to death with a dagger at Umuejechi Nekede autonomous community in Owerri West Local Government.

The unidentified victim was a tenant in the area but an indigene of Ohaji/Egbema LGA of Imo.

A resident, Iyke Opara, said the pregnant woman came out from the popular Ama-Ato junction before she was accosted by the suspect who had been terrorizing the community since he escaped from the April 2021 prison break in Imo.

The suspect, who claimed he was on drugs when queried in a trending video, was said to have become enraged and descended on the woman with the dagger after he asked her to give him money to eat and she shunned him.

According to the source, She told him to mind his business and that infuriated him. He removed a dagger he hid in his trousers, and stabbed her in the stomach.

The source said the woman lost a lot of blood and was pronounced dead on getting to the hospital.

He further said the suspect fled immediately but youths in the area pursued and apprehended him after several attempts to stab them.

Anokam, said to be in his 30s, was earlier arrested by Nekede vigilantes before being handed over to the detectives from the Ihiagwa Police Division amid heavy protest by the community youths who had concluded plans to lynch him before police intervention.

The police spokesman, Micheal Abattam, when contacted said he’s waiting for the situation report from the division.