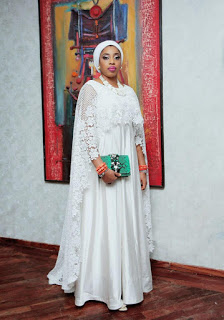 Olori Wuraola Zaynab Otiti Ogunwusi, the queen of Ife and wife of Ooni Adeyeye Enitan Ogunwusi of Ife, takes a bold step which is stationed against gender based domestic and sexual violence against women in Africa. Her banner is “the #1in3 Africa” Campaign. 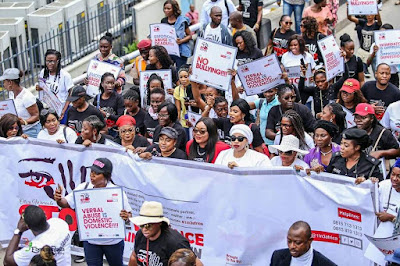 On Friday 30th June 2017 at 10AM Her Majesty,  led a large crowd of women on a march, across the streets of Lagos, to protest and raise awareness against domestic violence and sexual abuse meted out on women particularly in Nigeria and Africa in General. The march started from under the bridge at Falomo, went across the bridge into Akin Adesola and Ended up at the bar beach. It had a crowd of over 1000 grassroots women, online personalities and Nollywood celebrities as well as frontline media professionals marching with placards condemning violence against women. 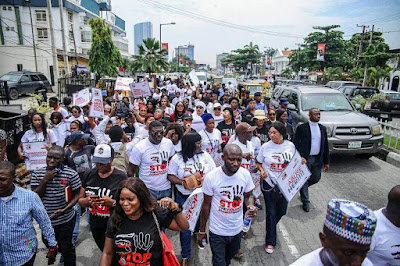 There was also a heavy presence of Police, Civil Defence, Road Safety and Emergency Response operatives. It was the first time ever,  that a highly placed personality, in the echelon one of Africa’s Highest Ranking Monarchs will take such a bold and brazen step towards speaking out against a scourge, which many and for generations, has regarded as an inevitable component of our socio-cultural system.

In sub-Saharan Africa, the patriarchal system of social organization allows men some unfettered authorities over women. In some areas, the penal code allows men to beat their wives as a means of chastisement! This system has led to so many women being beaten to stupor and emotionally battered at the instance of offences ranging from meals not being ready on time, talking back during arguments, to visiting relatives without a husband’s permission. This repeated battery has left these women cowed into subhumans, stripped of self will, and a desire to aspire for a better future. United Nations Records prove that 25% of women with recorded abuse cases die from battery!

Responding to journalists, Olori Wuraola revealed that she was peeved to the point of coming out to march on the streets of Lagos as a result of terrible cases she has witnessed in the rural communities, where on daily basis, She expressed deep rooted shock at the enormity of the pandemic and could not understand how people can go about as if nothing is wrong! 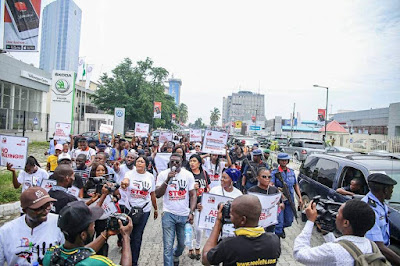 Olori wuraola said her team is working tirelessly to see that women going through abuse are provided help and support, culprits who abuse women are apprehended and prosecuted and that the society is galvanized into reacting differently to this scourge, treating it as a crime and not family affair. They are achieving these through social media, electronic media disseminations, lectures and counseling.

She revealed that the struggle will continue  and dates for marches in Port-Harcourt and Abuja are yet to be disclosed, with a plan to push for a specific  bill protecting women from Abuse in Nigeria at the National Assembly