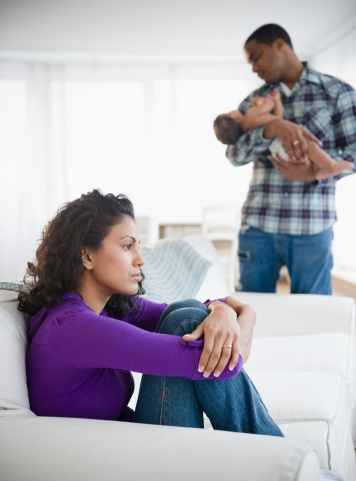 If you’re feeling down after having your baby, you’re not alone.  Recognizing And Treating Postpartum Depression. Postpartum depression (PPD) is a common condition many women experience after giving birth, though it can be hard to recognize. Here are the symptoms to watch out for, plus how it’s diagnosed and treated.
Having a baby is a life-changing event that rocks your world. And no matter how excited you are to finally get to know that tiny newborn that you fantasized about throughout your pregnancy, you’re also coping with roller-coaster hormones and scant sleep. So it’s no surprise that many moms feel overwhelmed and less than ecstatic about this new phase of life shortly after giving birth — experiencing a bout of the so-called “baby blues.” For some moms, however, those feelings linger and become worse rather than better, developing into what’s known as postpartum depression (PPD). And this condition is much more common than you might think, occurring in anywhere from 5 to 25 percent of new moms. But although PPD is rather common, it can sometimes be difficult to know if you have it and then to reach out for the help that’s essential for both you and your baby.

That said, PPD is one of the most treatable forms of depression. So if it strikes you, don’t suffer with it for longer than you have to. Read on for the information every new mom needs to know about PPD.

The exact cause of PPD is unknown, though it’s believed that hormonal changes that happen after childbirth may trigger symptoms. Many other big life disruptions may play a role, too, including feeling overwhelmed with a brand new baby, lack of sleep, an unrealistic view of motherhood, stress from changes in your routines at home and work, feeling less attractive and struggling with a new sense of identity.

RECOGNIZING THE SYMPTOMS OF PPD

Trying to figure out if you have the baby blues or PPD can be tough: Though you may know something isn’t quite right, you may not think it’s actually PPD. Sometimes, when people hear “depression,” we think of someone having thoughts of harming herself — so if you don’t have those feelings, you may think you don’t have PPD. But every case of depression, including PPD, doesn’t necessarily include thoughts of self-harm or suicide. Symptoms of PPD can include:

Even if you see these symptoms in yourself, one symptom of depression is self-doubt — so you may question whether your feelings are related to stress, the baby blues, PPD or simply tiredness due to new motherhood. What’s more, you may feel guilty or embarrassed about not feeling happy after having your baby, worried that it’s somehow your fault and you’ll be judged by others.

First off, know that PPD is never your fault. It can (and does) happen to any mother, and it’s not because of something you did (or didn’t) do. Most people understand this and are compassionate rather than judgmental.

Afraid to reach out for help because you fear your baby will be taken away? That’s not a goal of your healthcare practitioner or other professionals. They’re focused on getting you the help you need so you’re able to take good care of yourself and your baby.

ARE YOU AT RISK FOR POSTPARTUM DEPRESSION?

Some factors seem to put women at higher risk for developing PPD. But even if you do have some risk factors, it doesn’t mean you’ll definitely get PPD. Also keep in mind that some women without these risk factors develop PPD:

A personal or family history of depression, depression during pregnancy, PPD, severe PMS, bipolar disorder or other mental illness