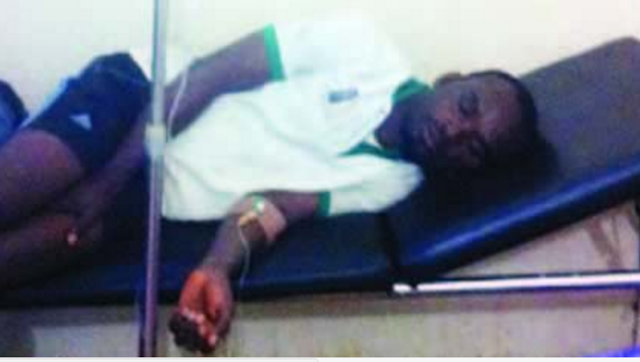 Alex Ochienu, a pastor with the Redeemed church in Abuja/engineer, has recounted how he beaten to a pulp for refusing to do frog jump as instructed by some soldier.

According to the pastor, the soldiers invaded the site where he was working and asked that he do some frog jumps, which he refused as he was fasting. This did not sit well with the soldiers, who proceeded to beating him until he collapsed and was rushed to an hospital in Gwarinpa.

Ochienu, alleged he was beaten with rifle butts and kicked in the stomach by a Cpl. M. Dankwa and his colleague whose name he did not know.

“The soldiers rushed into the site and ordered everyone to frog-jump; they flogged the workers and threatened to shoot us. I tried to explain to them that I was weak because I was fasting, but Dankwa was infuriated by my explanation.“He kicked me in the stomach; another soldier also joined in beating me till I collapsed. When they saw that I was almost lifeless, they left and I was rushed to the hospital by the workers.”

He also revealed that he learnt the soldiers apologised to the owners of the estate “for their mistake, ” he has resolved to  take legal action against the Development Control Department and the military for the assault.

The Paradise Estate Project Manager, Tobias Tokbe, revealed he was not at the constrictyion site when it happened but not only the pastor was beaten as another worker, Bem Ali, was also brutalised by the soldiers without any reason.

“I immediately called the development control director who said he didn’t authorise the soldiers to attack anyone. We asked the soldier why he beat up the engineer and he said Ochienu grabbed his jacket, which we know was a lie.” Tokbe said the riot policemen guarding the estate almost fought with the soldiers after the incident.