Senators Say They Are Ready for Battle with President Buhari 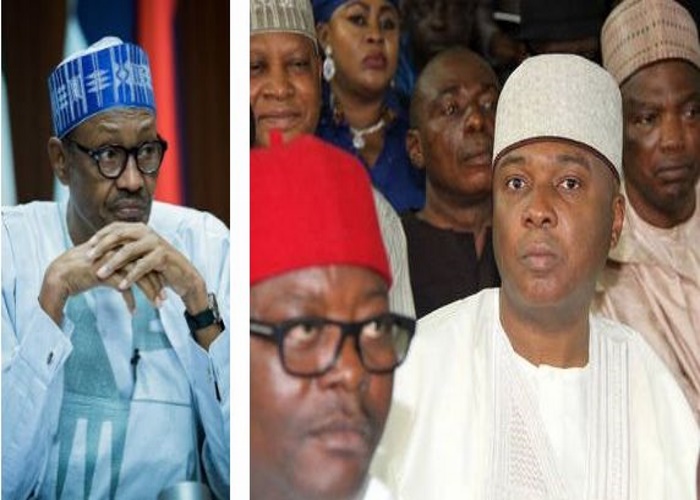 5 years ago / 678 Views
There are indications that the National Assembly is on the war path with President Muhammadu Buhari over the prosecution of the Senate President, Dr. Bukola Saraki, and his deputy, Senator Ike Ekweremadu, for alleged forgery of the Senate Standing Rules 2015.

According to Punch, although some of the legislators were uncomfortable with the anti-corruption war of the President, the relationship between the two arms of government came to a head with the senate forgery rules suit filed by the Federal Government.

It was learnt that many National Assembly members had concluded plans to frustrate any request by the President because of his anti-graft war.

Besides the senate president, who is standing trial at the Code of Conduct Tribunal, eight senators, including the Chairman of the Senate Committee on Appropriation, Senator Danjuma Goje, and a former Plateau State Governor, Senator Joshua Dariye, are being prosecuted for corruption related offences.

Goje is standing trial at a Federal High Court, Jos, for allegedly awarding contract for the purchase of N1bn dictionaries without due process, while Dariye is being prosecuted by the EFCC on a 23-count charge bordering on money laundering and diversion of the state’s ecological fund.

It was gathered that among the plans of the anti-Buhari senators, consisting of members of the Peoples Democratic Party caucus and their others colleagues in the All Progressives Congress sympathetic to Saraki, was to delay approval for Buhari’s appointments.

Investigations by Punch showed that those who could be affected by the hard stand of the National Assembly included the Acting Chairman of the EFCC, Mr. Ibrahim Magu, whose appointment had not been confirmed by the Senate.

Others in this category, it was learnt, included ambassadors, who would mainly be politicians. An APC senator, who is sympathetic to Saraki, confided in Punch that the National Assembly would be strict in its oversight functions.

He said, “As part of the measures to reveal to Nigerians that there is corruption in the executive too, we will be strict in screening appointees and in our oversight functions.”

Following the frosty relationship, it was learnt that the lawmakers had vowed to ensure that the principle of separation of powers was enforced between the two arms of government.

One of the Like Mind senators, who preferred anonymity, alleged that the Presidency, in collaboration with some APC leaders, had made up their minds to get Saraki and Ekweremadu out at all costs.

Like Mind senators, consisting of the PDP members and their colleagues that are supporting Saraki, were instrumental to his emergence as senate president last year.

The senator, who spoke with Punch, said, “When the Presidency and some of these party leaders discovered that they could not remove Saraki and Ekweremadu on the floor of the chamber, they are now trying to carry out their agenda using the court.

“Their intention is to ensure that both Saraki and Ekweremadu are arraigned in court on Monday and make sure they are remanded in prison afterwards so that we would be forced to change our leadership.”

The senator from the North Central geopolitical zone vowed that all legal and constitutional means would be explored by his colleagues to ensure that the Presidency was paid back in its coin.

Reacting, the Special Adviser to the President on Media and Publicity, Femi Adesina, said:

“The anti-corruption war will not be slowed down for any reason whatsoever. Let me refer you to what the President said on Wednesday while addressing Presidency staffers. The war on corruption will never be slowed down.”