‘She can’t say no’: Ugandan men demanding to be breastfed by their wife. 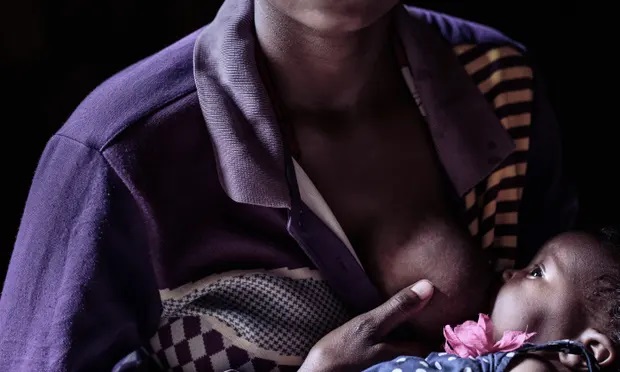 A study is looking into the coercive practice in Uganda, amid calls for the government to address the issue

Jane’s* husband likes breast milk. “He says he likes the taste of it, and that it helps him in terms of his health. He feels good afterwards,” said the 20-year-old from Uganda, who has a six-month-old baby.

Jane said her husband started asking for her milk the night she came home from the hospital after giving birth. “He said it was to help me with the milk flow. I felt it was OK.”

Men drinking their partners’ breast milk is not uncommon in some areas of Uganda, and in parts of Tanzania and Kenya. It is now being linked to gender violence and coercive behaviour and there are concerns over the impact on babies’ nutrition. Little was known about the practice until Uganda’s minister of state for health, Sarah Opendi, broke the silence in parliament in 2018 and warned against “a growing culture of men demanding to suckle, which was becoming a problem for some breastfeeding mothers and their babies”.

The reasons for the phenomenon, and its consequences, are now the subject of what is believed to be the first preliminary study into the practice, by Kyambogo University in Kampala and Britain’s University of Kent, supported by the Global Challenges Research Fund.

“It was very much an exploratory mission. We didn’t know if we would find anybody willing to talk to us who admitted to doing it. We didn’t even really know if it was real or not,” said Dr Rowena Merritt, a British behavioural scientist who specialises in public health, and a lead researcher on the project.

The study focused on the rural Buikwe district, in the central region, where the behaviour is reported to be common.

Anonymised interviews were conducted with a group of four men who worked as “boda boda” motorcycle taxi drivers.

“One said: ‘I know other men do it, but we’ve never talked about it.’ So that to me would suggest that it is a common behaviour, but it isn’t socially accepted,” said Merritt.

The preliminary research suggested that men often drink before the child is fed, usually once a day, sometimes more frequently, and for about an hour at a time.

The men said they found it energising. “It sustains me, I come home for lunch and it relieves stress in the middle of the working day,” said Thomas*.

“There is a belief in some communities that breast milk has energising and curative powers, even curing diseases such as HIV and Aids and cancer,” said Dr Peter Rukundo, a senior lecturer at Kyambogo University who assisted with the research.

The men also said it was a way of initiating sex and showing affection. “But then it is happening to women who have just given birth,” he added.

One man told the researchers: “When breastfeeding, I feel like I’m being looked after like a child, and this becomes addictive. I feel like a prince.”

Women did not seem to have much choice in the matter. “It appears to be a hugely coerced behaviour from the people we spoke to,” added Merritt.

When asked what might happen if she said no, one woman replied: “I fear that my husband might go elsewhere if I wouldn’t let it happen.”

Thomas admitted that resistance could result in the women being beaten. “She can’t say no because you become obsessed, it’s hard to stop. If women say no it can cause violence, it’s a big issue,” he said.

The behaviour has been linked to gender-based violence in the Karamoja region in north-east Uganda. “The principal nutritionist has claimed that it is a common practice there in the form of violence, that when the men get drunk some went for the breasts forcefully,” said Rukundo.

Health professionals, including midwives and nutritionists, told researchers about cases where babies had to be given formula milk because partners wanted the breast milk, and where women came to clinic with infected or bitten nipples caused by a man suckling. There are also risks to babies of cross-infection from the man’s saliva.

“There is a gap in public awareness of the risks in such practices. But the challenge is we don’t have the evidence of the magnitude of this behaviour. We need a survey on prevalence,” said Rukundo.

He also called on government and development partners to work together to mitigate harm. “We don’t have any clear message or deliberate effort, despite the health minister saying the issue is there. So, in a way, it is denial. If they remain silent, the issue will remain underground,” he said.

Merritt added: “The fear for me, is the longer that this continues it will become part of the culture and tradition for the next generation. I see parallels with FGM.”

*names have been changed