She denied me sex and deserted our family – Actor, Kalu Ikeagwu files for divorce from his wife, demands custody of his son and stepdaughter. 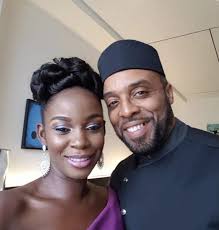 The hearing of the suit seeking the dissolution of the six-year-old marriage of Nollywood actor, Kalu Ikeagwu, and his estranged wife, Ijeoma, began at an Ikeja High Court on May 30 with the actor telling the court how ljeoma allegedly deserted their matrimonial home and denied him sex after welcoming their son.

While being interrogated by the respondent’s counsel, Mrs S.I. Amedu, Ikeagwu told the court that his wife packed out of their matrimonial home and sent him a mail that she was on her way to her father’s house in Enugu. He, however, said contrary to her claim that he later saw her at the Murtala Muhammed International Airport with the children after some days.

“I got back home from a trip on Aug. 4, 2021, to find out that my wife had left our matrimonial home with the children to an undisclosed location,” he told the court.

“I tried to contact her when got to the house and found it empty. I sent her an email on that same day and she replied that she had gone to her father’s house in Enugu.”

The actor denied the reports that he sent his wife and kids out of the house and failed to provide for their upkeep.

He also revealed how his estranged wife denied him sex and also poured water on him while he was asleep.

Ikeagwu said he stopped sending money to the children for upkeep and maintenance because his wife denied him being the father to his stepdaughter.

He added that this was after she accused him of attempting to sleep with the child and she failed to acknowledge the money he sent to her.

Kalu and ljeoma got married in 2016. They welcomed their first child in 2019.