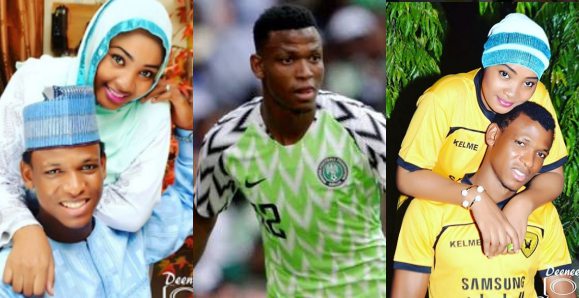 Sumayya Mustapha, wife of Super Eagles star Shehu Abdullahi, has denied being assaulted by her husband contrary to reports that went viral on social media few days back.

The Super Eagles defender was said to have left scars on his wife’s face after engaging in an argument over phone call issue.

According to previous report, Abdullahi was accused of eavesdropping on his wife whenever she had a call, while at other times he goes through her phone.

However, the woman has come out to defend her husband, saying there was no truth whatsoever to the news that broke out the other day.

She said that the scar on her face was as a result of an unexplained accident, adding that her hubby has never raised his voice at her talk-less of hitting her.

She said: “I will like the general public to know that my husband has been nothing but a good, loving and caring husband, he has never raised his voice at me let alone raise his hand.

“The pictures of the bloody eye, it was from an accident I had. I love my husband and we are happily married.

“We take this as a test of faith from Allah because no blessing will come to you without a test.”