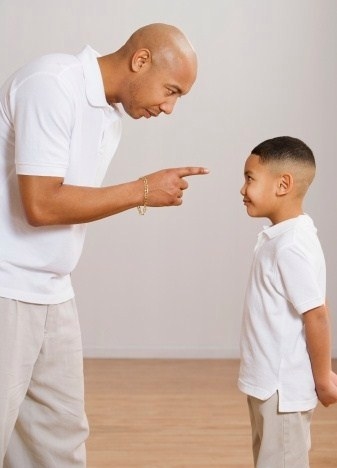 Smacking children makes them more aggressive and badly behaved, a study has found.

American researchers found the form of discipline severely affected children, regardless of how good a parent-child relationship was the rest of the time.

‘There is a common belief that spanking that occurs in a positive parent-child relationship will not be harmful to children,’ said Shawna Lee, an assistant professor at the University of Michigan School of Social Work.
‘We were able to test that belief in this study [and found that] spanking predicted worse, not better, child behaviour over time, regardless of how warm mothers were with their children.’

She added that despite numerous studies such as indicating that spanking increases child aggression, parents still often use physical punishment to discipline children.

More than 3,200 white, African American and Hispanic families in major cities participated in the study. Data was collected when children were ages 1, 3 and 5.

Mothers disclosed how often spanking occurred and reported children’s aggressive behaviour and their own warmth toward their children.

The findings were published in the journal Developmental Psychology.

Meanwhile other research has found that parents who threaten or shout at their teenagers make them more likely to developdepression and disruptive behaviour.

The risk is highest in teenagers whose parents are violent towards them – for example, if they hit them or threaten them with a gun or a knife.

‘The take home point is that the verbal behaviours matter,’ Dr Annette Mahoney, a professor of psychology at Bowling Green State University, in Ohio, said.

‘It can be easy to overlook that, but our study shows that the verbal hostility is really relevant, particularly for mothers who scream and hit, and for fathers who do either one.’

The researchers say there is a danger of parents becoming trapped in a vicious cycle.

Dr Mahoney explained there is a cyclical element to the problem as teenagers become harder to handle if they have behavioural problems meaning their parents are more likely to resort to threats.

For the study, which was published in the journal Child Abuse and Neglect, 239 troubled adolescents between the ages of 11 and 18 filled out surveys that asked if they were hit, called names, or subjected to other forms of physical or verbal violence.

Parents of the youths also participated, reporting their behaviours.

Some 51 per cent of the adolescents said they had experienced serious physical or verbal aggression, or both, from one or both parents.

Having a mother who both shouted and was violent was found to increased children’s risk of mental health problems to an even greater extent than having a mother who was aggressive in only one way.
This may be because teenagers feel more traumatised and threatened when physical violence is a real possibility.

In contrast, shouting by mothers who had not previously escalated to physical aggression did not appear to increase the risk of psychological problems among teenagers, Dr Mahoney told Reuters Health.

On the other hand, fathers who were verbally abusive affected the adolescents’ mental health, regardless of whether the threats were accompanied by physical violence.