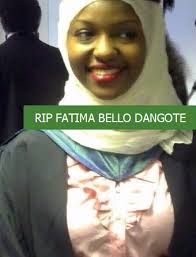 Africa’s business tycoon Alhaji Aliko Dangote is in mourning over the death of his niece, Fatima Bello Dangote.

The lady in question is by blood relations, his neice but since the death of her father in a plane crash in 1996, she became his adopted daughter and Dangote has been responsible for her upbringing and her education all through the University.

After battling brain cancer for over two years, she gave up the ghost in a private hospital in the U.K last week and was buried according to Islamic rites.

If only money could buy health!!!

Our hearts go out to Alhaji Dangote and his family and May her soul rest in peace.