STEER CLEAR OF THESE THINGS WHEN DISCIPLINING YOUR CHILD 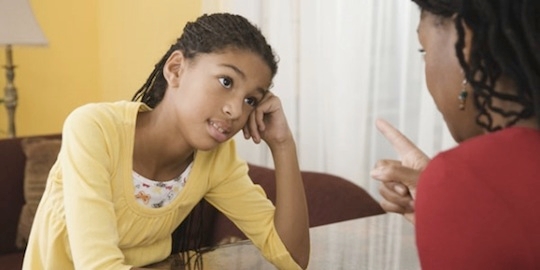 Choosing the right way to discipline a child can be hard for parents. Finding out what your child responds to and staying consistent with punishments is enough to make a parent want to call it quits, but the best thing that you can do for your child is to correct misbehaviour. It’s as important to learn appropriate ways the reprimand as it is to know things that should be avoided.

Check out 5 things you should stay clear of when disciplining your child.

1. Spanking when angry- Spanking versus not spanking is an age old argument but one thing that everyone can agree on is that a parent should not spank a child when they are upset. If you spank your child when you’re angry you run the risk of physically and emotionally hurting your child. When emotions are at a peak, it’s hard to think rationally.

2. Too many chances- Of course you should afford a child the opportunity to correct misbehaviour, but the chances should not be limitless. If they keep getting chance after chance, eventually they won’t take your warnings to serious.

3. Inconsistency- If your child is allowed to act in a certain manner sometimes and it be ok, it’s hard to blame them if they do that same behaviour during a time that’s inconvenient for you. If tantrums are ignored or not dealt with at home, reprimanding for the behaviour at the grocery store can cause confusion and worsen the behaviour.

4. Not following though- If you tell your child that they can’t play with their game systems because of misbehaviour, but cave in a few hours later after some begging and pleading, the only thing they learn is to whine more so that they can get what they want from you.

5. Yelling- There’s no need to lose your cool when dealing with your kids. That could lead to making them become anxious and unable to deal with their emotions in the proper manner. Using eye contact and a low, purposeful voice should do the trick.

What are some things that are discipline no-no’s for you?