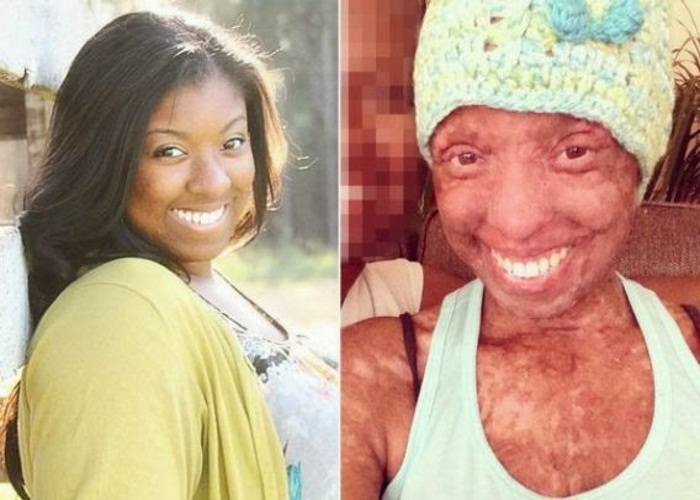 24 year old student Khaliah Shaw was left almost blind, screaming in agony and lost 90% of her skin as a result of a rare allergic reaction to a common prescription drug she was prescribed for bipolar.

When she first started experiencing discomfort, Khaliah, from Georgia, US, was told she had the flu but one night she woke up to agonizing pain as her skin fell off. Her hair and fingernails had also fallen out and her body covered in open wounds. 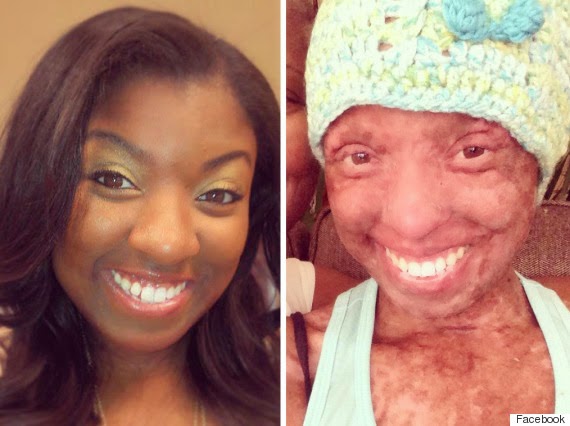 She was prescribed the medication, Lamotrigine in 2013 while a student at Georgia College and State University and within a month of being prescribed the anti-seizure drug, Shaw had developed a purple rash, and had blisters inside her eyes and mouth, and on her hands and feet. Doctors initially had no idea what was wrong with her, and isolated her thinking she had an infectious disease. 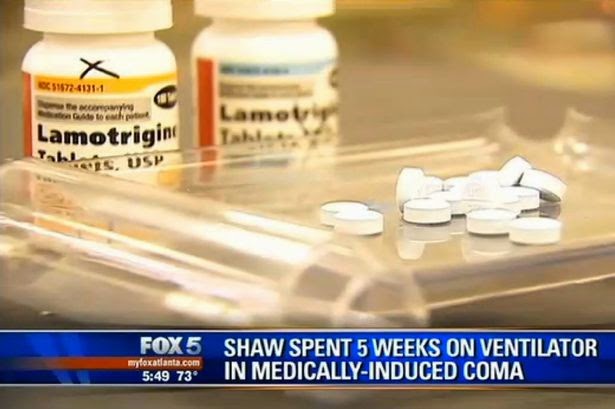 She had to be sedated for five weeks. She had to relearn how to walk, sit, stand and feed herself, and was kept in hospital for seven weeks.

Khaliah is now raising awareness of Stevens-Johnson Syndrome, the condition which nearly killed her “It was a shock to see that… all my hair had come off. I didn’t have any fingernails. When I realized all my hair was gone, I cried,” Shaw wrote on her blog. “When my friends came to see me, I cried. When I realized I couldn’t walk, I cried. When I left the hospital, I cried. EVERY time I look hard enough in the mirror, I cry. Crying has become my thing because…I don’t know what else to do! I literally feel like I woke up in another persons body.
“It breaks my heart when people stare at me. It tears me up when I sense that people are weirded out by my appearance. If I choose to stop living, then SJS wins. And we ALL KNOW that is NOT happening! Not today. Not tomorrow. So it’s time to put on the armor of God and fight. HARD.” “It still haunts me to think about everything they did to me while I was in hospital. I can still hear the IV machines beeping. I never want to end up in the burn unit EVER again. There are still things I avoid to this day because it reminds me of that time. And no amount of discomfort is worth getting SJS again. NONE.”
Shaw hopes to return to university to continue her graduate studies in public health, but told Fox Los Angeles: “The biggest thing is I would love to have my vision back.”