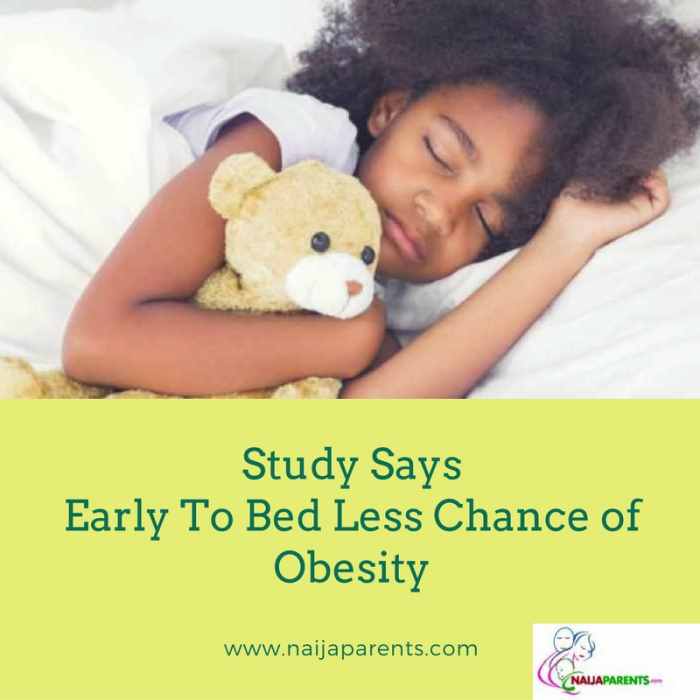 Sleep is important to everyone, both young and old. Many assume that since all children do is sleep and play it doesn’t really matter what time they go to bed as long as they do. A new study on bedtime has found that bedtime, leave alone sleep itself, is very significant for a child’s health.

The study conducted by researchers from Ohio State University established that kids between three and five years who slept before 8pm had a less likelihood of obesity when they got to their teenage years. The study also found that a keeping a child up until 9pm or later doubles the likelihood of obesity.

This study reminds parents and families in general that bedtime routines are actually very important and will affect the child’s future if not taken into consideration. Good bedtime routines also have a positive effect on emotional, social and cognitive development as well as behavior.

The study followed 977 children in the Study of Early Child Care and Youth Development. The babies were born in 1991 in 10 different US cities. They started out by dividing the bedtimes into three categories namely 8pm or earlier, between 8pm an 9pm and after 9pm.

The bedtime for preschoolers was linked to obesity at about 15 years in average. Of those with the earliest bedtimes, only one in 10 were obese in their teenage years as compared to 16 percent among those who went to bed between 8 and 9pm. 23 percent of those who went to bed after 9pm were found to be obese by 15.

Dr Sarah Anderson says that the focus was on bedtime because bedtime has a larger impact on the amount of sleep one gets compared to the time you wake up. This is especially true for children since adults can work around and easily adjust to different schedules but children stick to theirs.

Another study conducted by UCLA School of Public Health tracked the sleep and weight patterns of 1930 kids aging 0 months to 13 years for five years. They found that the kids involved in the study who were 0 to four years and had insufficient sleep at night were 80 percent more likely to be obese five years later. That’s about 25 in 100 kids.

They didn’t conduct further research on why inadequate sleep at an early age causes obesity but Professor Frederick J. Zimmerman had a few guesses. He suspects that kids who don’t get enough sleep may be a little uncomfortable. This may drive them to find comfort in food. Also, lack of sleep leaves them tired and they may not have energy for much physical activity afterwards. The study also found that taking a nap didn’t reduce the chance of obesity so getting a good amount of sleep at night remained the best solution.

Easier said but must be done

That said, we know that bedtime routines aren’t such an easy thing to implement. Some families have it harder than others because the parents probably work late and this can easily delay bedtime for the kids.

It is important to note the big impact that sleep has on overall wellbeing and the future of the children though. The fact that it has a positive impact on mental, social and cognitive development means that a child who sleeps early enough when young will be better placed to attain their full potential and live a healthy life later on.

Try as much as possible to find a suitable solution to sleep issues in your home so as to set your children up for a great future. Look for help and advice if you need to and don’t give up easily because it can be a difficult journey before you finally settle into a routine. All the best!