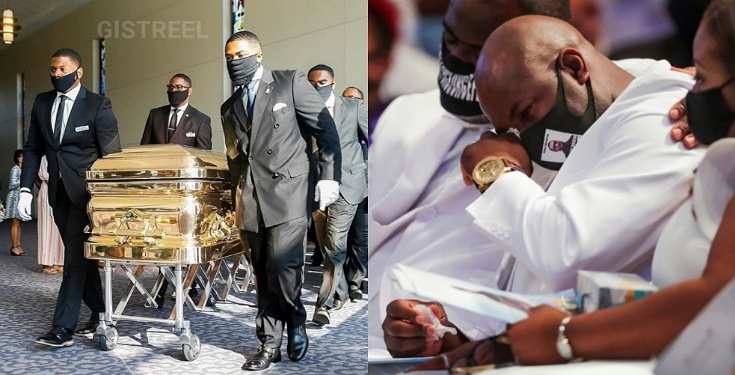 Sympathizers who gathered at a Houston church to today, June 9 to pay tribute to George Floyd at his hometown funeral were thrown into tears as they bade him farewell.

The Houston funeral service marked the culmination of a long farewell to the 46-year-old African American whose death in custody ignited global protests against police brutality and racism blacks in America and beyond.

Politicians, civil rights activists and celebrities joined the family to share memories of the man they called a “gentle giant” before his gold casket was due to be conveyed by horse-drawn carriage to his final resting place by his mother’s grave.

“We may weep, we may mourn, we’ll be comforted and we will find hope,” the church’s co-pastor Mia Wright said.

It should be recalled Floyd died on May 25, 2020 after a white Minneapolis cop knelt on his neck for 9 minuets while he pleaded “I can’t breathe”.

His death has come to embody fractured relations between communities of color and police in the US and beyond as tens of thousands of protesters have taken to the streets.

The Fountain of Praise church was the final stage in a series of ceremonies paying tribute to Floyd before he is buried.

Prominent among people in attendance were actors Channing Tatum and Jamie Foxx, as well as boxing champion Floyd Mayweather who is reportedly paying all expenses.

While condemning Floyd’s death, Donald Trump has adopted a tough approach to putting down the protests and he once again voiced his support for police at a roundtable on law enforcement on Monday.