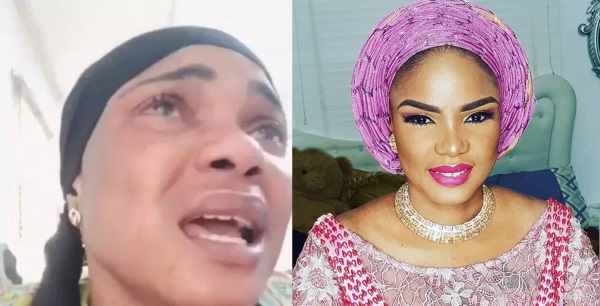 Alice Iyabo Ogunro, popularly known as Iyabo Ojo is a Nigerian actress with over 150 films under her belt as well as a famous director and producer.

Recently, Iyabo Ojo posted a video on Instagram. It went viral amongst blogs, articles, forums and other social media outlets.

The 6 minute video began with a sniffing, teary-eyed Iyabo Ojo. Her face free of the usual makeup, her head capped with a simple, black headtie. Too simple and solemn an image for the everyday fashionista and single mom.

Feel free to go see the video for yourself.

For those of you who’d like the short version, here goes: Iyabo Ojo shares a bit of her story. A story of youthful naivety. A story of a loveless marriage. A story of the struggling single mother.

A story worth three lessons to learn.

It is an undeniable truth that youth brings energy as well as naivety.

A special kind of naivety where you believed you knew everything about the world. You felt you knew better, until life yanks the carpet from under your feet, flipping your world upside and showing how oh so little you knew.

Have you ever had those moments?

And this is how it happened.

After her debut role in her first film Satanic in 1998, a 21-year-old Iyabo found herself in a relationship with a famous Lagos-based movie marketer. Who initiated the first move? Nobody knows. But what is known is the interesting coincidence of Iyabo entering a star relationship at the onset of her acting career.

Consider this: Her spouse, whose movie-marketing reputation preceded him, could set the stage for Iyabo to walk the red carpet in years to come.

Not long after this relationship began, Iyabo became pregnant. A terrible mistake when her acting career had barely taken flight yet.

Few of you would relent, chalking this up to the energetic audacity of youth.

But the truth is, Iyabo should have known better than to get into a relationship when it wasn’t time for her.

She should have known better than to become pregnant

She should have known better than believing everything would work itself out in the end.

She might have the excuse of not knowing, but you don’t. Don’t allow the things that glitter now to distract you from the right path that you deserve to follow.

The year was 1999, and Iyabo was well into her pregnancy.

Much to her joy and relief, Iyabo’s beloved did not leave her to a dishonoured and out-of-wedlock fate.

But that smile of joy and relief would die a natural death on her wedding night. Instead of hearing sweet nothings from her beloved, all Iyabo heard was the brutal admission along the lines of:

“I only married you for the baby.”

So much for love and happy endings.

Now, some of you might ask: “Isn’t that the point?”

True. After all, babies are usually the result of marriages and Iyabo thought she knew her husband well. With reference to her video, Iyabo herself admitted that her ex-husband did not love her, and his admission on their wedding night confirmed this.

Now this begs a question: Why would she be in a relationship with someone who did not love her?

Was she only in it for the chance to boost her status as a budding actress, instead of love?

It is possible to speculate that if Iyabo knew her spouse did not love her from the onset of the relationship, then she could have walked out of it early, long before her pregnancy.

However, the fact that she (Iyabo from her video post) indirectly admitted having an intimate relationship with a man who did not love her, got pregnant with his baby and married him through it all, raises an eyebrow about her smart decision-making.

Perhaps, Iyabo DID notice the small signs from her beloved, but stubbornly plowed through, believing that he’d change after marriage, and more so after the first child.

So what can you learn from this then?

Guard your heart. And this does not mean encasing it in unfeeling ice.

To guard your heart is to love with your heart, while thinking with your head. You are not merely admiring but also observing. If you are observing, you are bound to notice things about your spouse that you wouldn’t if you were only love-drunk.

This gives you an advantage and power over the direction of your life.

LESSON 3: Letting go of the past

Fastforward to 2001. Iyabo had given birth to her daughter Priscilla. The distance between she and her husband could not be any greater. A man present in body but absent in heart. Yet Iyabo believed she had it within her to reach him and make their marriage work.

It was only a matter of time before Iyabo finally caught on. A divorce followed. She decided to live well enough alone with her children and channel all her love and energy in raising children for the tough times to come.

Despite struggling through trying times and selling her valuable possessions to get herself and the children by, her acting career flourished even until today.

But is everything well in paradise?

Indeed, Iyabo did the right thing. Not just for the sake of her children, but for her sanity as well. She decided that she had pushed enough, and decided to let her go of her ties with her husband.

Or did she really let go?

It seems Iyabo has not let go of the past. Someone should tell her that it takes more than removing your exes name from yours, it is about acknowledging, accepting and letting go of the past.

It is never easy to forgive nor forget. However, to begin letting go of your past, you must first accept that it has happened. Make small steps to let go. And then slowly, but surely you move on.

Iyabo may have forgiven but it is highly unlikely she will be forgetting anytime soon. Even after a decade or so, she has not accepted what has happened. She failed to confront this issue. All she did was suppress those unresolved feelings to focus on her children and her career.

Unlike Iyabo, you are who you are. So see this for yourself and understand that letting go is but a single step.

What prompted Iyabo Ojo to post such a video? Nobody knows exactly. For most, all they can do is apply the balm of “sympathy comments” and move on. For some, they could care less about another Nigerian celebrity throwing themselves an attention-seeking self-pity party disguised as a “grateful reflection” video.

Nevertheless, if you brush aside Iyabo Ojo’s emotional breakdown (or what she calls a “grateful reflection”), you will find warnings in her story. Warnings to all single and married women everywhere.

To those who think they know better than others.

To those who love so much they leave their hearts unguarded.

To those who hold onto the bitterness of the past without learning or letting go.

Remember, and never forget these wise words of Benjamin Franklin.

“Experience is the best teacher, but a fool will learn from no other.”