TEENAGE DATING: YOUR DAUGHTER HAS JUST GOTTEN HER FIRST BOYFRIEND 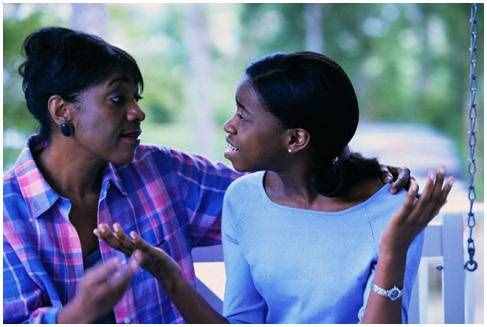 This news is not exactly one that will make the average Nigerian parent to shout “hallelujah!” although it is a sure discovery every parent will make at a certain point in their teenagers’ lives. Given the norms and traditional upbringing that influence our character and behavioural attributes as Nigerians, it is unlikely that a Nigerian kid will approach his or her parents to mention, talk less of discussing about his or her girl/boyfriend. This may not be true in some families depending on the magnitude of influence western cultures have exerted on those families.

Whereas an American kid can pop into the living room and in the presence of her parents and older siblings, drop the bombshell: “I’d be having a sizzling date with my new boyfriend”, the Nigerian teen will nervously walk around the entire space of the house, palms covered in sweat, all the while taking quick side glances at her parents to check if they’ve got their eyes on her. As soon as she gets convinced that her parents won’t take any particular notice of her absence, she shuts the door as quietly as she can behind her and off she floats to love-ville!

Now, it will be quite untrue to say you never knew a day like this would come, so the very first thing that would be expected of you as loving, intelligent parents is this: do not be alarmed! As soon as you panic or freak out, the kid would be greatly tempted to put you in the zone where all “anti-love agents” go. So keep your cool, and tread gently. Remember, when emotions are involved rational thinking takes a back seat. This is why you ought to take over the driver’s seat and force her to come correct right? Wrong. She’ll always be your daughter but you’ve got to face it that she’ll need some experience of her own which will give her the necessary lessons fundamental to her success in deciding the right suitor for herself in later years.

Your role as a parent will stand out in the form of guidance. It may not be necessary to go behind her back to pry information out of your daughter’s friends concerning her dating life. That may be counter-productive because even if they divulge every secret relationships she’s ever had to you, confronting her with such a shocker may stir up anger and mistrust. In the situation where you got some information you’re not comfortable with concerning your teen, approach her lovingly. Don’t put it to her like a magistrate; only encourage her to express her intentions and views. You may remind her of the family’s expectations of her, the kind of friend she’ll deserve, his nature and character.

This would give her thoughts a line of direction. But in any case, try not to make it seem you’re enforcing too many rigid rules or barricades. When her decision doesn’t exactly reflect yours, do not get mad. It may help to think that her experience as a teenager, may differ from what you had experienced while you were a teenager. If your own parents never let you out on apicnic with friends, you may not expect your daughter to automatically accept the same treatment. You didn’t have a boyfriend till you were 25, but this may not be a part of her own story.

Two major goals should remain paramount once you’ve finally come to know your daughter has a guy she’s seeing. Number one is that you should ask every necessary question you can, firstly from her, and then ask her to invite him over so you can equally know him at a close range. Secondly, be fully sure that you’ve talked to your daughter enough about sex. This should be done in their pre-pubescent years so as soon as they get to the phase, your words will keep resounding. They may feel the temptation sometimes to act like every other girl does, but if your advice and encouragement have been consistent over the years and your relationship with your daughters firm, they won’t end up ruining the family’s reputation.