The info Larissa has on Chioma is detrimental, big wahala ahead” – Kemi Olunloyo 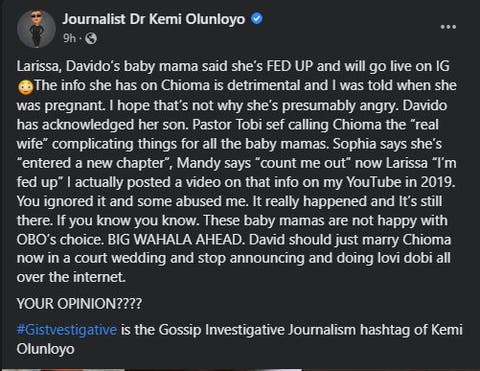 Controversial journalist, Kemi Olunloyo has shared her thoughts after the fourth baby mama of the globally recognized music star, Davido, Larissa London declared her intention to let it all out on social media.

Recall that on Wednesday morning, 12th October, Larissa who shares a son named Dawson with the crooner took to her Instagram story where she affirmed that she has had enough and would be going live by 7 pm that same day.

As expected, her post stirred tension as netizens were eager to hear what she has to say. However, a few moments later, the UK-based make-up artist deleted the post and turned off comments on the single post she has left on her IG page.

This came a few hours after Davido purchased a Mercedes-Benz G-Wagon for his third baby mama and fiancee, Chioma Avril Rowland.

Weighing in on the saga, Kemi Olunloyo in a post via her official Facebook page averred that Larissa has a piece of detrimental information about Chioma. She further claimed that Davido’s baby mamas are not happy with the singer’s choice.