Things a Teenage Boy Needs to Hear From His Mum 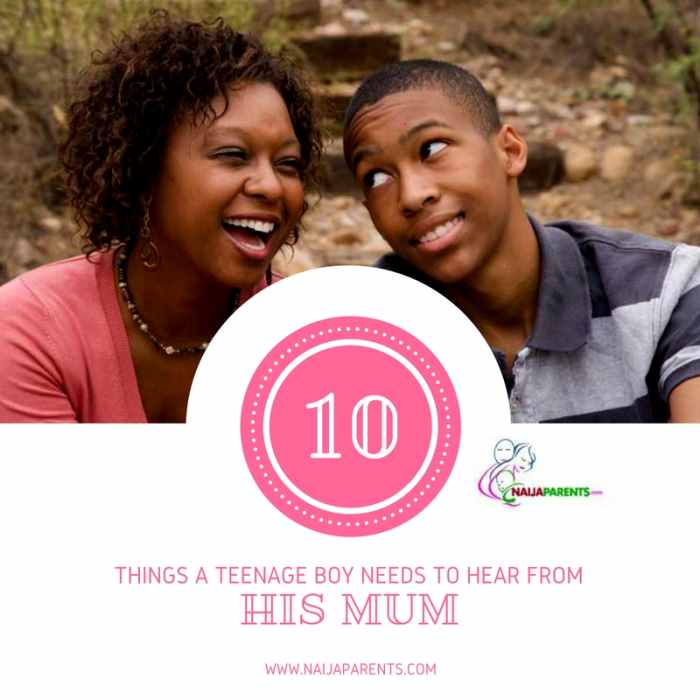 A teenager is mostly mature and has experienced quite a lot already. They’ve experienced failure, success, loss, friendship and different kinds of love. A relationship with the mother can be a little tricky during this time and many are of the opinion that fathers should be the key players at this point.

That makes a lot of sense but there are some things that a mother needs to say to him. This doesn’t mean that a father can’t or shouldn’t say them. It just means that a mother shouldn’t forget to say them because they will have a great impact on the child. Of course they have to do with girls and how to handle them. It’s an inevitable topic at this age.

There has been a lot of assault and violence meted out against women and while these acts are usually carried out by adult men, these men were once teenage boys. We see young boys treating girls and women badly and seeing them as mere sex objects yet let it slide because ‘who’s child is that?’ Many times it’s okay until you see your own child making foolish mistakes and you just can’t tut and walk away.

Strike the iron while it’s hot, they say so let’s begin the striking.

Women respond very strongly to these three words. Be very careful how you use them because if you don’t mean it you just might land yourself in a lot of trouble. Hell hath no fury like a woman scorned. And some are crazier than others.

Don’t pretend to be something you’re not just to impress a girl. If she doesn’t like you the way you are she’s probably not worth your time. Don’t change your dressing, how you talk or what you stand for to impress a girl.

Buying a girl gifts and taking her out on dates is okay as long as you’re not doing it to keep her from leaving you. You can’t buy someone’s affection so no matter how much money you have, spend it wisely knowing that you can’t buy her love. Also, have the courage to walk away from a gold-digger if you ever come across one.

Many men don’t want to break up with a girl and be the bad guy. So they string a girl along instead, hoping she’ll get the memo sometime. Women love with all they are and can endure a lot, especially for love, so she may take a long time to see it.

Let her know that things have changed, that it’s over as soon as is humanly possible.

This doesn’t mean don’t go for what you want. It means you’re a great young man and any girl would be lucky to have you. If she has any brains she will realize that you have great relationship potential. Don’t get entangled in any kind of love triangle because those can get messy.

Women love it when men show appreciation, even for the little things. Don’t hesitate to thank and compliment her.

Respect is important for women too. You can disagree on things because such is life but make sure you don’t show her any disrespect for it. She will respect you more for it.

She shouldn’t expect you to step into her dad’s shoes and neither should you treat her like her dad. You are peers.

There is no excuse for hitting a woman. It doesn’t matter if she cussed you out, cheated on you or even hit you first. Cool it and walk away. Apart from it portraying you as a gentleman, it will save you jail time.

Don’t have sex if you are not ready to buy and change diapers, spend sleepless nights with a crying baby or pay school fees for someone other than yourself. In fact, just don’t do it until you are married and can handle all the consequences of sex.