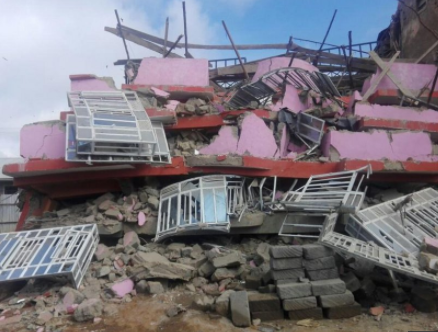 A mother of five identified as Precious Chizoba Okeke, from Imo State has lost her life in Aba, Abia State, after a three-storey building collapsed on her while hawking her goods.The building, which was undergoing demolition, crashed on Okeke and shattered her body and she died instantly on the spot.

The brother of the deceased, Nonso, said that he and other family members were still in shock. He said: “When I got to the scene, I was shocked to the extent that I began to ask people if Boko Haram had entered Aba to bomb us all. It was a horrible sight to behold. It was when I got close that I saw my sister’s body. Her second leg was missing and from what I saw there, the building was being demolished on the orders of the state government.

“I learnt that the bulldozer was working on a nearby building and that the vibrations forced the building to collapse on my sister, just as she was hawking, to raise money to take care of her children.  I heard she even ran, attempting to escape, but the building still crashed on her. She was selling zobo and other drinks. The children also rushed to the scene, but were taken away by sympathisers. As I’m speaking with you, my old mother is still expecting her back in the village.

He explained that Okeke’s husband was devastated. He added: “We beg the government and our governor, Dr. Okezie Ikpeazu, to save her children by extending a hand of help to them. We don’t blame the government, but the children now need help.” After the incident, the Abia State government, through the Commissioner for Information, John Okiyi Kalu, released a statement, sympathising with the family.