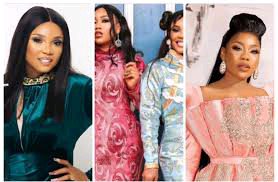 Celebrity stylist, Toyin Lawani and actress, Carolyn Hutchings, are currently tearing each other to shreds on Twitter as they accuse each other of unspeakable things.

The drama started from a reality TV show they are both featured in called “The Real Housewives of Lagos”, and they brought the drama to Twitter.

Toyin had accused Carolyn of being the cause of her failed marriage to her ex-husband, Aremo, with whom she had her first daughter, Tiannah.