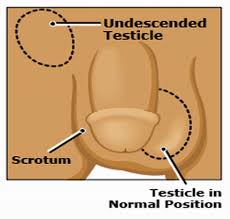 Undescended testicles, medically known as cryptorchidism, is a condition where the testicles aren’t where they are supposed to be. Instead of sitting in the scrotum, the bag beneath the penis, one or both testicles remain inside the abdomen. It is common in young boys and is a condition that one is born with, and the estimates stand at about 1 in every 25 boys. Doctors say that it should fix itself in the first few months of the baby’s life.

womb, the testicles usually form in the abdomen. They then gradually drop into the scrotum when fully formed about a month or two before birth. Sometimes this doesn’t happen and one or both testicles remain where they are. Where one testicle remains undescended it is termed as unilateral while with two testicles it is known as bilateral cryptorchidism.

Babies that have a low birth weight, are born prematurely or have a family history of undescended testicles have a higher likelihood of being born with this condition. The actual cause of undescended testes has, however, not been ascertained yet. It should rectify itself within the first three months of the baby’s life but if it goes past six months, there may be a need for surgical intervention. Doctors estimate about 1 in 100 boys require treatment to solve their undescended testicles otherwise they remain the same.

The best way to diagnose this condition is by physical examination. You will also notice that the scrotum is asymmetrical or smaller than expected. The doctor has to physically feel for the testicles. They should be near the scrotum. If the doctor doesn’t feel them he may need a second opinion from a pediatric surgeon so as to ascertain the findings. Similar results call for surgical intervention.

One of the first steps is a diagnostic laparoscopy. This is meant to ascertain the position of the testicles. If they are indeed in the wrong place, the surgeon conducts a procedure known as an orchidopexy. This is meant to move the testicle or testicles into the scrotum. It is a simple and straightforward procedure and has a high success rate, just in case it seems complex and unlikely to succeed. An orchidopexy should ideally be done before the child is 12 months old. The patient can go home as soon as the procedure is done since it doesn’t call for an overnight stay at the hospital.

Undescended testicles pose no harm in the early years of a child’s life but could spell danger later on if left untreated. It may also cause testicular torsion (where the chord twists thus cutting off blood supply to the testicle) or a hernia somewhere close to the groin. Treating them early reduces the risk of testicular cancer and fertility issues. Testicles require temperatures lower than regular body temperature for them to properly develop. Temperatures are definitely higher in the abdomen and this reduces the chances of high-quality sperm. The longer they stay inside the abdomen the higher the chances of fertility issues later on even though the whole situation is painless. This is why surgery is done early on.

This condition should not be confused with retractile testicles. This is where the testicles occasionally pull back into the groin either due to fear or excessive low temperatures. This is a normal reflex and should therefore not be a source of worry. Only testicles that are truly undescended after the stated amount of time should be cause for alarm.

As mentioned above, the surgical procedure is simple but the patient may need a few days of bed rest after leaving the hospital. Two to three days should be enough so as to eliminate any activities that may cause some strain on the freshly operated scrotum. A few doctor’s visits will be necessary just to check on progress until they heal.