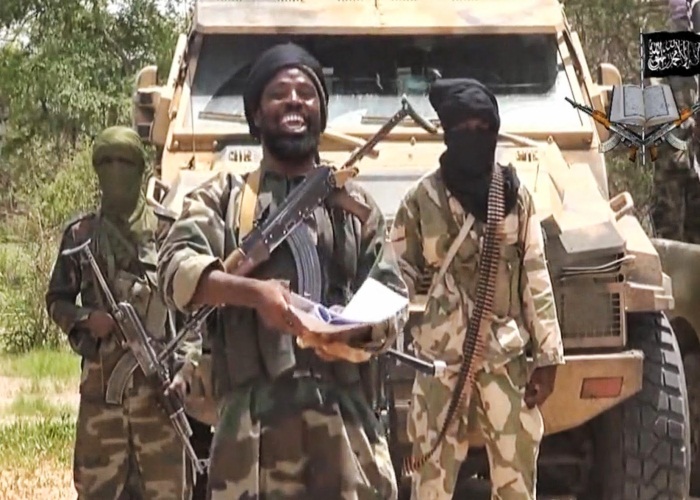 “They carry arms and fight alongside the other terrorists,” a senior military representative, who declined to be identified, told journalists. “They [foreigners] are also experts and trainers.”

One of the excerpts of the video footage from Boko Haram camp shows a man speaking in Sudanese Arabic, whose face is completely covered by a white turban, administering sharia judgments in front of a crowd in a field stained with blood. “God ordered all believers to enforce his punishments,” says the man to camera. “God ordered us to cut off the hand of the thief and flog the adulterer and adulteress.”

His words were translated to the crowd by a preacher repeating them into a loudspeaker in Hausa. The man appeared to be overseeing at the gathering called to implement sharia law.

Video also shows a man wearing a black turban, not typical in north-eastern Nigeria. He seems to be understanding Arabic, as he occasionally nods in agreement with the man in white turban, while another militant appearing to be foreigner waves Boko Haram black flag behind them.

In other part of the film are flogged and some of them have hands amputated. One man is buried up to his head in a pit and stoned to death.

The military experts say the distinctive Mandara mountain range seen in the background shows that these atrocities took place somewhere in south-eastern Borno state near the town of Gwoza.

“This video helps document their atrocities as evidence in the event of any trial,” a senior military representative told, adding: “to understand their pattern or mode of operation … and equipment in their possession with other information, is vital for intelligence”.

Major General Chris Olukolade, the director of defence information, has confirmed two weeks ago that the Nigerian army has recovered video recordings of the villainous crimes committed by the Boko Haram terrorists.

Yesterday officials of the Nigerian army said that thousands of foreign currency was found on a dead terrorist commander who was killed during its operation in Dikwa, Borno state on May 23rd. The terrorist is believed to be of foreign descent.