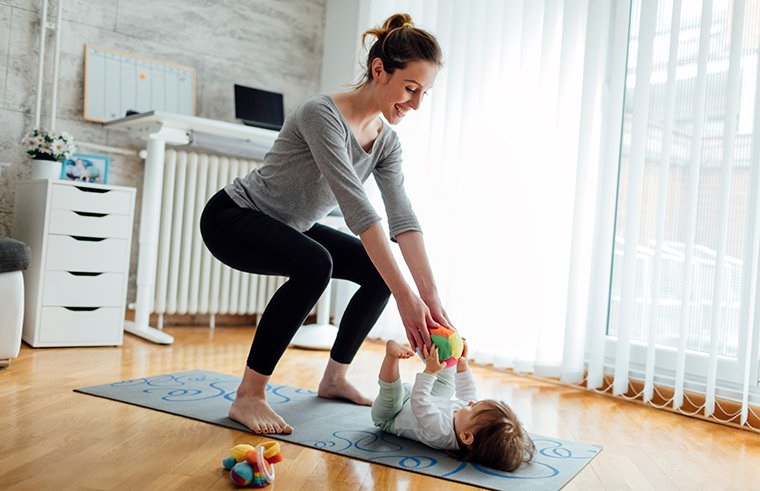 Most of us give some thought to our exercise regime, particularly before and after having a baby. But how many of us think about exercising our vagina? Tara Stojanovski, director of Fit Mama Co is determined to educate women on the benefits of vaginal exercise, an activity that is rarely talked about, let alone properly practiced.

As a personal trainer with a background in ballet, Tara decided to open a barre studio. After doing her research, she realised just how beneficial this would be for pregnant women and how little focus there was for women in this area.

“There’s so much lacking of what pre- and post-natal women actually need in terms of fitness and I just dove down the rabbit hole and uncovered the pelvic floor and how important that is to us as women,” says Tara. “And yet it’s this topic we don’t talk about because anything that involves our vagina, we just ignore.”

However, for many women, it’s not until they’ve had babies and are suddenly in pain, incontinent or suffering from a prolapse that it’s properly discussed. “It has such a massive impact on your quality of life,” she says. “So that’s just really what got me fired up into wanting to do more for women’s fitness than just focusing on their baby weight.”

So what is the pelvic floor?

The pelvic floor is the actual muscle that sits between the vaginal cavity and uterus. “It’s a muscle group so like your bicep; if you’ve never exercised it, you just wouldn’t be able to pick anything up because it has no strength to it,” explains Tara. “The same with the pelvic floor.”

When the pelvic floor is dysfunctional, either inactive or over-active, this can lead to all sorts of pain and discomfort such as back pain, hip pain, pelvic pain, and pain during intercourse.

Is this just a pregnancy thing?

According to Tara, it’s something that can affect all women – not just those having babies.

“Women can have a dysfunctional pelvic floor before children and may suffer many years after children. It’s not necessarily something that instantly happens, but it becomes weakened from having children and then it remains weakened,” she says. “The demands of motherhood compound on top of that and not knowing how to support your pelvic floor, not doing anything to help the health of your pelvic region, can lead to issues down the track.”

Tara finds that many women just live with the pain, not realising it can be fixed. “It falls into that that taboo area of not wanting to talk about our vaginal region at all because it’s embarrassing,” she says. “In a lot of ways, the main symptom is incontinence – it’s peeing your pants – so most people aren’t wanting to shout from the rooftops that they’re peeing their pants, and I think we’ve sort of pushed it into that category of, ‘I’ve had babies, that’s just what happens now, my body is not the same anymore’.”

What can I do for my vagina?

Tara is on a mission to encourage women to do something about their pelvic floor, rather than just put up with it. “It’s common, but it’s not normal,” she says. “And there is something that you can do about it.”

Fit Mama Co runs classes to help women focus on vaginal fitness and pelvic floor issues. The sessions generally run for 40 minutes are totally baby-friendly. “We specialise in pre- and post-natal fitness. It is applicable to all women, but really we’re targeting that area when it affects women most,” says Tara.

Unfortunately there are not many doctors offering the right sort of advice in this area. “I don’t think there’s enough of an emphasis on it throughout the entire pregnancy process,” she says. “There seems to be a point in some antenatal classes that they’ll mention it around 20 to 26 weeks, but at that point, you’re quite inundated with information about everything that’s about to happen.”

Later in hospital, new mums might be reminded to do exercises however there’s so much going on with dealing a newborn, that it doesn’t feel like a priority.

“Unless you’ve got a doctor that actually is interested in it, or has some push to it, it never really gets mentioned to you again other than casually like do your exercises,” says Tara. “And the problem is that the physiotherapists that I’ve worked with that specialise in women’s health or physio have mentioned that about 50 percent of women, given a verbal cue on how to do a contraction, are still doing it wrong.”

Tara encourages all her clients to have a pelvic floor examination even during pregnancy. “The pelvic floor can actually cause issues with your delivery as well,” she says. “You can be too tight to deliver, so to speak, so if your pelvic floor is not relaxed, if you don’t know how to relax your pelvic floor and let it stretch, then your risk of having an emergency C-section and instrumental delivery and episiotomy are actually quite raised as a result.”

Tara finds that pelvic floor examinations after having a baby can solve many problems for women. “I had a lady that thought that she was having back pain from her epidural and that it was epidural-related,” says Tara. “I said, go get your pelvic floor checked. And lo and behold, it was a weakened pelvic floor; she did her exercises and the pain went away.”

According to Tara, it’s never too late to do something about your pelvic floor and most issues can be solved with simple exercises that require no cost or equipment. “The pelvic floor is not the first thing that we think of, but it’s essentially the hammock that holds everything in place at the bottom,” says Tara. “It does actually have quite a lot of jobs that it’s responsible for.”